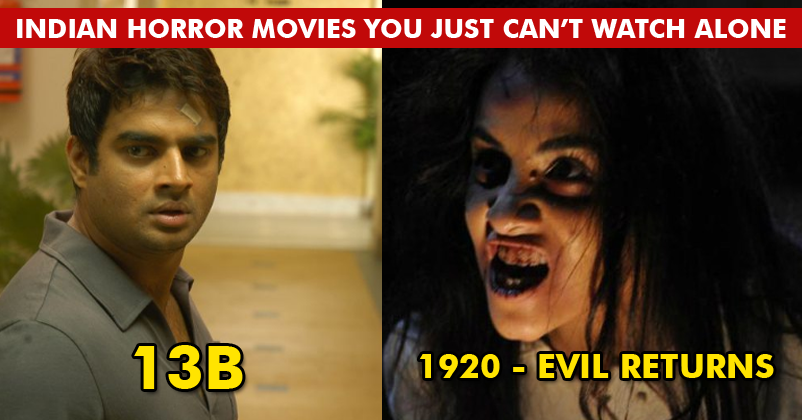 Bollywood is mostly known for its typical nonsensical masala, romantic movies or for some cheap Hollywood rip off action movies. But there are many movies that distinguishes the Indian cinema from the world, defines the class of the Bollywood. Bollywood has also made some very good horror films. Some of them are very underrated and not-so-popular as the other commercial movies. Whenever we think of an Indian horror movie, the first thing that comes to mind is a Ramsay film with a puraani haveli, old Ramu Kaka, spider webs, creaking doors and scary background noises. Ugly monster creatures and an old grey haired witch doing serious black magic. Back then the graphics VFX had poor quality, the costumes were hilarious, despite being horror films such movies were extremely funny. While some films have demolished the reputation of Indian horror movies, but there are some horror gems too. Horror films in India have undergone a big transformation, the horror films nowadays are made in the urban setting, they have even adopted the new experimental genres like ‘found footage’, ‘psychological horror’ in its story telling. Raat is considered to be one of the best horror films of all time. This supernatural thriller is written and directed by RGV starring Revathi in the role of protagonist. The film was a box office success, it received positive reviews, and it remains a cult classic. The best part about this film is that it doesn’t go over the top, the film uses excellent camera angles and creative scare sequences to engage the viewers. The plot is really simple, a girl is possessed by the spirit of a dead cat. This film is only 90 minutes long, three characters, shot entirely in one house. This movie was made by RGV at the time when he was good at making movies. Kaun is one of his better works. If you’re looking for a good suspense thriller then this one’s for you. With its peculiar characters, unpredictable story, and brilliant performance by the cast, this movie is one of the best cult movies to ever come out of Bollywood. The story of the film is really simple, a young woman is left all alone in the house. Her family is out-of-town. The news channel reports that a serial killer is on the loose. The woman is terrified and then suddenly, the doorbell rings. Who?

The film revolves around a television show that mirrors the life of the protagonist’s family. It reveals what will happen to the family, the same television events happen to the family. The film is packed with some scary chills, violent flashbacks, and disturbing characters. 13B is a perfect example of a film that doesn’t depend on weird camera angles or creepy background score to scare the audience. A fine script with a good cast does the job of terrifying the audience.

RGV showed how a horror film can scare the hell out of you without having much blood and gore. This was also a very innovative attempt by Ram Gopal Varma to provide Indian audiences with a horror anthology film. It’s not easy to present six different scary tales with twists in a film. If you’re someone who enjoys dark, twisted, bizzare short horror stories, then this one is for you.

The film revolves around a married couple who are deeply in love and they move to a haunted house in the year 1920. The film has all the elements of a horror film; haunted mansion, light and darkness, love and lust, possession and exorcism, but what sets it apart is its terrific story-line and performances, the film hardly has any dull moments. 1920 is a brilliant, no-nonsense horror film that you have to watch for its simplicity and realism. The film is about a successful magician who starts having constant hallucinations which starts distracting him in his magic acts. He is haunted by the death of his father and sister, a ‘Daayan’ killed them. The powerful witch promised that she will return for him one day. The movie has so many spine chilling moments, the film is a blend of magic, supernatural, occult and suspense, it is the most unusual Bollywood film that you’ll ever see.

This was the first time in the world cinema that a film which had no title was about to be released to describe an unseen, unheard horror story. But due to the censorship rules, the movie was released with the title “Question Mark”. The film tells the story of a group of friends who went to shoot their final year project film but never returned. Later a camera was found which captured their fate.

Karan Removed As Roadies Judge! Is Slap Incident The Reason? Check Out Who Replaced Him
What? Kaabil Distributors Have Approached Rakesh Roshan & Demanded Rs 15 Crores As Compensation?