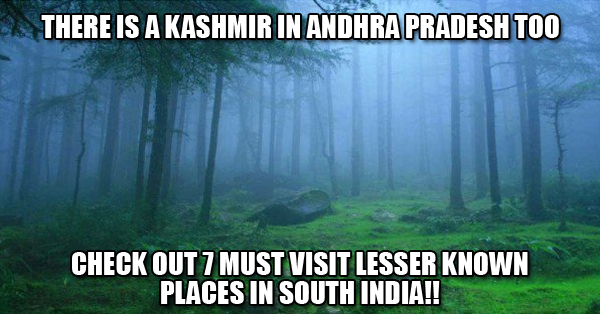 India is a huge country with a number of Tourist spots and when it comes to South India you will find many more of those. Starting with Beaches which can never be seen in the North, Water Falls, Temples, Tourist Attractions, Caves, Gardens and many more.

So Here we Present you 7 Tourist Places in South India which are not known to many.

1. Athirappilly Falls – The Niagara of India

Athirappilly Falls is situated in Thrissur District of Kerela. It belongs to Athirapilly Panchayat of Chalakudy Taluk and is nearby to the famous tourist waterfall of Vazhachal Falls. It has an elevation of 390 feet and a height of about 82 feet. Athirappilly Water Falls is also nick named as “The Niagara of India” and is the Largest Waterfall of Kerela. Lambasingi is also known as Lammasingi is a small village of Chintapalli Mandal, Vishakapatnam District of Andhra Pradesh. The speciality of this place is the Temperatures here go down as low as 0 Degrees in December to January. It is situated 1000m above the Sea level. Also this is the only place in South India where Snowfall Occurs. This Village is also known as Kashmir of Andhra Pradesh. It is also known as Kalavara Durga. It is an ancient Mountain fortress located 3km from Chikaballapur and approximately 70km from Bangalore City. It overlooks Muddenahalli and Nandi Hills. From the Top of the Mountain. 4. Gandikota – The Grand Canyon of India

Gandikota is village on the bank of River Pennar located 15km away Jammalamadugu of Kadapa District. It is known as The Grand Canyon of India. This is a beach in the village Maravanthe near Kundapura of Karnataka. It is spread across 55kms. It runs next to the beach and this along with Suparnika River flows on both sides of the Road making it a awesome Scenary. Thalaiyar Falls is a Perfect Tourist Spot for all those who love Trekking. It is located in Pallani Hills of Dindigul District of Tamil Nadu. Height of this falls is approximately 975 feet or 297 mts. It is the third Highest Waterfall in India and Highest Water Fall in Tamil Nadu. It is also known as Coconut Island. So why waiting? Plan Your Next Trip to these Places.