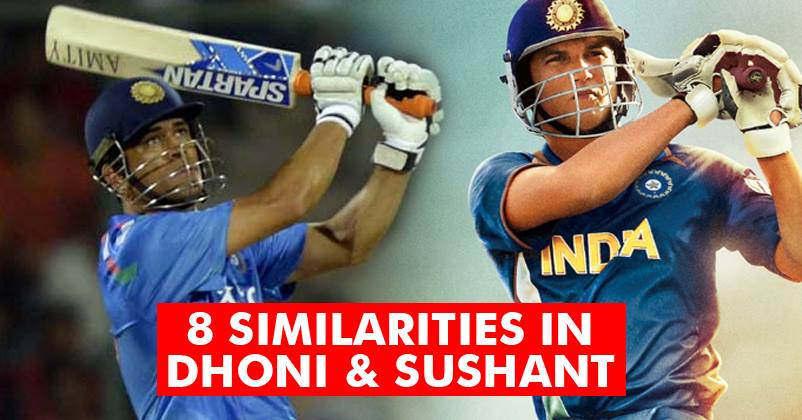 It is always advisable to not find any relation between REEL and REAL life. They are supposed to be quite different. When it comes to the world of ‘ACTING’ i.e. Bollywood, words like ‘Method Acting’ is used a lot. Now for some of people who are not so familiar this word, let me help you with it.

According to Google, Method Acting is a range of training and rehearsal techniques that seek to encourage sincere and emotionally expressive performances. In short, an actor seeks motivation by living the life of its ‘SUBJECT’. Now since the whole movie is about M.S Dhoni, the subject is ought to be our captain cool. Many renowned people in Bollywood count ‘Method Acting’ as one of the toughest thing to follow. And in order to enact like our captain cool, I guess ‘METHOD ACTING’ is the only best to do justice with the role.

However, SUSHANT SINGH RAJPUT, doesn’t have to worry about ‘METHOD ACTING’. Not because he is too good at it, but because he has himself lived the life of M.S Dhoni. They both share many similarities. Here are some of it. Both of them hailed from small towns but with big dreams in their eyes. They later on moved to bigger cities for better exposure. Both of them belonged from Middle class family. Their fathers were government employees who dreamt of their sons also taking up government jobs before they settled down in life. There is no denying the fact that after certain age, sons don’t usually get along with their fathers. M.S Dhoni and Sushant Singh Rajput have the same story. Like every middle class mentality, even their fathers expected them to focus on getting a Government Job and securing their lives, but they decided to take the road less travelled and chose passion over JOB SECURITY which eventually paid them off quite well.

3. They are born Fighters. Doing something off your father’s verdict is in itself a great deal. M.S Dhoni’s and Sushant Singh Rajput’s father didn’t approve their decision of pursuing their passion over their conventional JOB. But they fought against all odds and finally made it happen. Their fathers gave them long lectures about the minimal possibility of becoming SACHIN TENDULKAR OF CRICKET AND SRK OF FILM INDUSTRY, but they made their own names into the industry – the first of DHONI in Cricket and the first of SUSHANT in Bollywood.

4. They had their SISTERS to back them up. It is because of their sisters for what they are today. It was M.S Dhoni’s sister, Jayanti Gupta who supported him when he failed to convince his father. On the other hand, Sushant’s sister, Mitu Singh was a state-level cricketer who supported Sushant to take up a career in acting. Their sisters supported them when they needed motivation in their lives.

5. Both of them were college dropouts. Although this is not an advisable idea, but doing such of thing is indeed a courageous and stupid act all together. However, both of them were quite good at academics, but they decided to give their passion a shot. Sushant cleared AIEEE Engineering exam and bagged All India 7th position. He pursued Mechanical Engineering from Delhi Technology University but later on dropped out in the 3rd year for his passion towards ‘DRAMA AND DANCE’. Dhoni on the pther hand just completed his intermediate and wanted to join St. Xavier’s College in Ranchi but couldn’t because of cricket.

6. Stubborn For Their Passion. Despite knowing the fact that their families would not support their decision of following their passion, the still did that. They were passionate to make their dreams into reality. They had obstacles in their way, but they faced them with great pain and hard work.

7. They raised their standards through their talents. Both of them didn’t have any connection or GODFATHERS into their respective profession. M.S Dhoni started off by playing school cricket followed by club cricket and at last got selected for Ranji team. His sheer talent behind and in front of the stumps helped him to achieve great feats. While Sushant Singh Rajput started off by joining Shiamak Davar’s dance group and playing small roles on TV before bagging the lead in ‘Pavitra Rishta’ and then getting his first big break on the silver screen with ‘Kai Po Che!’.

8. Both of them had Relationship during their struggling days that didn’t go well too long. Many people are not aware the fact that M.S Dhoni had a girlfriend way back in 2001-02. Her name was Priyanka Jha. However, while Dhoni was struggling hard to get into Indian Cricket Team, he lost Priyanka in an accident. Sushant Singh Rajput too had a live-in relationship with his co-star Ankita Lokhande. Although, the relationship didn’t go so well and they broke up.

If you can share some more similarities, do feel free to share in our comments section below.

Secret Revealed! Akshay Wanted To Marry This Woman & She Is Not Any Bollywood Actress!
Here’s How Ban On Indian Films Will Kill The Pakistani Film Industry! This Is Unbelievable!