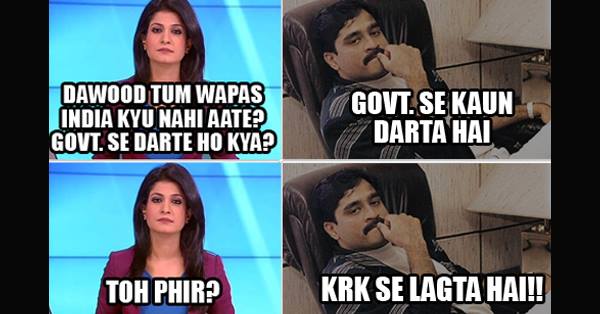 Dawood Ibrahim, the founder of D-Company and the man who is currently on the wanted list of the Interpol for criminal conspiracy, organized crime syndicate. Dawood Ibrahim has been on the run ever since the 1993 Mumbai Blasts, which he allegedly organized and financed, the mastermind behind the bombings.

He’s the India’s most wanted man. Forbes magazine ranked him on the number 3 on the World’s Most Dreaded Criminal List. Dawood is also accused of running an illegal empire, and for being the don of the underworld that mainly operates in the Mumbai. Even though Dawood is no longer in India, but his links and connections still allow him to direct his operations in India.

In 2008 Indian court issued a warrant against Dawood, charging him with sport-fixing in the Indian Premier League. Dawood Ibrahim and his D-Company has been a subject to numerous bollywood movies. Movies like Company, D, Once Upon A Time In Mumbai were partially based, inspired from the criminal life of Dawood Ibrahim. Anurag Kashyap’s “Black Friday” was the first film that dared to actually use the name of Dawood Ibrahim directly. The movie was a realistic depiction of the 1993 Bombay Bombings.

India now has concrete proof that Dawood Ibrahim is currently in Pakistan. According to a report published in Hindustan Times, Dawood Ibrahim is currently living in Pakistan with his wife. But like always Pakistan has been denying the India’s allegations, and protecting the Dawood. Hindustan Times also published a recent photo of Dawood, who now is 59 years old, living along with his wife and children. The Indian Security Agencies has the possession of the original photograph along with other evidences like Dawood’s telephone bill. It’s about time when Indian Govt. take back Dawood to India whether Pakistan like it or not.

So now here are the 8 Dawood Ibrahim Jokes That Will Make You Laugh Hard.

1. Ladies and gentlemen we have a new HIDE AND SEEK champion! 3. I don’t know who you are. But I will find you and bring you back to India. 5. Sajid Khan, do us all a favor and stay far away from making away.