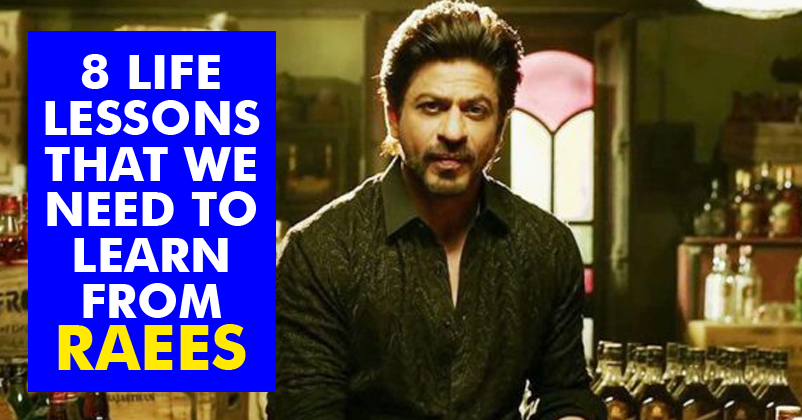 There are no particular set of rules through which we have to learn. If one has the urge and presence of mind, he or she can seek motivation from everything and anything. Movies are a great source of information and also act as a source of influencing minds. ‘Raees’ is a movie that has been influenced by the life of a gangster but much opposite to its nature, it indeed gives us some good life lessons to learn from it. So here are 8 life lessons that we all need to learn from Raees movie.

1. Respect every profession irrespective of its status in our society. The iconic dialogue of SRK in this movie which goes like ‘Koi bhi dhandha chotta ya bada nahi hota …’ indeed teaches us that we should not categorize or judge anyone on the basis of job or work that he or she does.

2. Work is religion and we need to worship it. Another dialogue, another lesson. ‘Dhande se badda koi mazhab nahi hota’. It is our work and job that is giving us an identity in the society. So it is our duty to respect what we do and be punctual towards it.

3. Life can be stressful at times, but the one who holds patience is the real winner. Things weren’t going so well when Raees’s ‘apni duniya’ project was put in GREEN ZONE which made the construction stop and left him in great debts. He became furious on small issues and also yelled at his wife. The scene teaches us to have patience and never shout on the ones we love the most.

4. To succeed in life, the combination of intelligence and courage is a must. ‘Baniye ka dimag aur miya bhai ki daring’, the trademark dialogue of SRK in this movie is not just a line but a handy lesson that we all need to learn to overcome our problems.

5. Never fall back to make up for your mistakes Raees unintentionally smuggled RDX into his city for the sake of money that he used for the good sake of the people of his locality. Later on realizing the effects of his smuggling conspired by his enemy, he decided to make up for the mistake by killing them who were also responsible for the bombings that took place due to those RDX that he smuggled.

6. Friends who knew and stayed with you since childhood can never betray you. When Raees was out of the town to FIX THINGS, Nawasudin Siddique had his family and friends particularly ‘SADIK’ (Mohammed Zeeshan Ayyub) so as to conspire with him and kill RAEES. But it was SADIK who stayed loyal and gave Raees the hint of the presence of ACP Majmudar around him.

7. There is always a way to tackle the problems that you face in your life. Ever since ACP Majmudar (Nawasudin Sidiqui) came into Raees life, he had created problems for him. But it was Raees who always got rid of them by believing in himself and the possibility of finding a way out. Be it by importing his stuff through the sea route or by distributing it in small vehicles to enter into the city, he had always the solution to his problems.

8. One should not discriminate people on the basis of their religion. When riots broke out, Raees took the responsibility of delivering food to every household in his locality. But when he himself ran out of the stocks, he didn’t cut the lines off from Hindu dominant area as per suggested by one his workers. ‘Dhanda karte waqt kabhi HINDU-MUSLIM socha tha kabhi jou ab soch raha hai?’, this was the dialogue that won everyone’s heart and gave us hope that humanity is still alive.

So these were some of the real life lessons that we all need to learn. What are your views about it? Please share your opinion in the comment section below.

The Release Of Raees In Pakistan Is Most Likely To Be Banned Due To This Reason!
Akshay Kumar To Romance This Bigg Boss Contestant In “Toilet: Ek Prem Katha”!