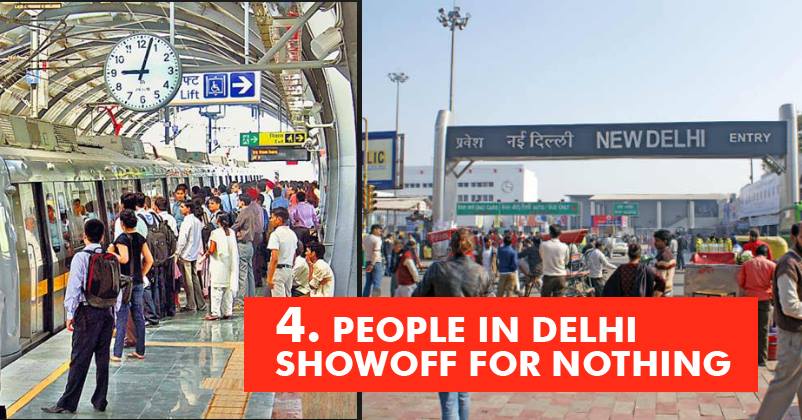 The national capital Delhi is always in the news for some reasons or the other. In today’s world where an ideological hashtag is good enough to sway away a big chunk of crowd, being judgemental and stereotypical about certain things are not a big surprise. As Subramanium Swami sarcastically quotes, “A fight between a Northern Brahmin and a Southern Brahmin is never ending’, stereotype is still going to be in our mind and soul for a bit more longer time as of now.

Delhi is like one of those kids who always gets the blame for farting while it is the other kid ‘Haryana’ who farts the worst and messes up with the gaseous composition of the air (Stereotype Intended). As a result, the rest of the class or in a more precise manner, the Rest Of India develops a stereotype for Delhi. So here I am clearing out some of the misconceptions that the rest of India has about Delhi.

1. Delhi people are just too loud and aggressive.

2. They fake out too much about their money and status.

Well, the fact that ‘Sarojini Market’ is like a second home for a lot of youngsters, this fact itself thrashes down this misconception. We don’t think twice before laughing our arses off on a funny joke instead of passing it away with a smirk. And that is how live our LIFE.

3. Delhi Girls are the meanest, shallowest and hollowest creatures in the world.

Buddy, just because a girl doesn’t reply to your texts or ‘FRAAAAND REQUEST’ on Facebook, that doesn’t really make her one among the adjectives that you quoted. If you are nice to them, they will respect you likewise, but if you mess up with them, they can actually give the “MEAN GIRLS” a run for their money.

4. Delhi guys are just way too desperate for girls.

5. Delhi youngsters are just a pile of rich spoilt brats.

No, not all of us have the luxury to have ‘AISH ON DADDY’s CASH’. As much as we want to shop, eat and drink, we also keep a conscious effort of earning our own living and not just becoming a burden for our families and pay for all our expenses. Although ‘ghar ke wifi ka bill papa ke name ka hoga’.

6. Delhi is not safe for girls.

Buddy, please tell me which part of our country is absolutely safe for girls? The only reason for the violence against women is just because of the mentality that men have for women. And on a personal note, a little bit of smartness from women’s side can also help them stay safe. Walking down on deserted roads and lonely alleys are not the wisest among options in any part of our country.

7. Every ‘YOUTHOOOOB’ video shot in Delhi is not from CP (Connaught Place). You might have seen a lot of prank videos and social experiments, but assuming them all to be shot at CP is just plain simple mistake. And asking a Delhiite about whether he has visited CP is just so damn irritating.

8. Delhi people are just dumb and proclaim themselves to be EDUCATED.

It is funny to see how people agree to such quotes by watching a few bunch of edited videos on YouTube which shows the dumbness of mere 6 people out of the population of 1.8 crores.

Well, I can go on and on with many of points but I am afraid that somewhere my frustration will show up and it will become a complete mess. So go ahead and share your views about the misconceptions that the rest of India has about your city. It will be fun knowing them.