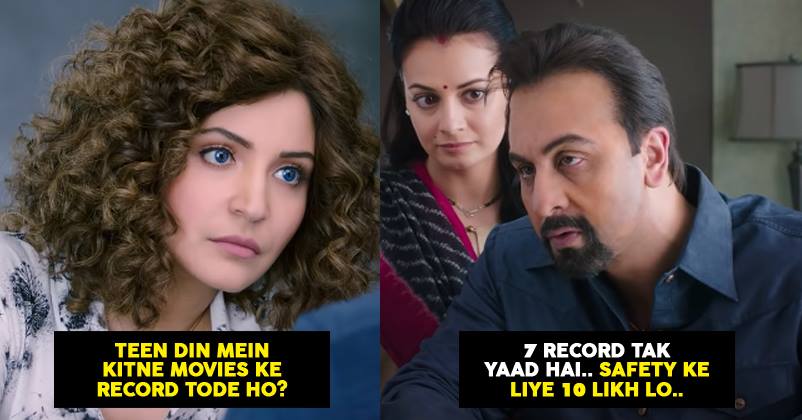 Ranbir Kapoor starrer “Sanju” which is based on the life story of Bollywood actor Sanjay Dutt released on June 29, 2018, and took the box office to storm with its grand opening. The film has been highly acclaimed by viewers and critics alike and even celebrities have given it big thumbs up on social media.

The director of the movie is Rajkumar Hirani who has already proved his impeccable talent in the field of direction with some of the blockbuster films in past, such as “3 Idiots”, “PK” and Munna Bhai series. And now it seems that his latest release “Sanju” will beat them all in terms of box office records. From the opening day itself, it has been breaking records and now Ranbir’s movie has left behind even the three Khans of Bollywood!

Take a look at the records that “Sanju” broke in the first weekend:

1. “Sanju” made a whopping collection of Rs 34.75 crore on the its opening day and with such massive figures, it has become the biggest opener of the year, leaving behind Salman Khan’s “Race 3” that earned Rs 29.17 crore.

2. It’s the biggest Bollywood opener to have been released on non-holiday and non-festival.

4. With a huge collection of Rs 34.75 crore, it has become the biggest opener of the filmy career of Ranbir Kapoor and beats the first day earnings of “Besharam” that released in 2013 and earned Rs 21.56 crore on its first day.

5. It’s not just the biggest opener of Ranbir but Rajkumar Hirani’s career too as it has beaten “PK” that earned less than Rs 100 crore.

7. Well, it’s not just the biggest first weekend opener of 2018 but the only movie to earn Rs 117.35 crore in the first weekend the history of Bollywood.

8. “Sanju” is also the biggest earner on single day not just of 2018 but in the history of Bollywood and has broken the record of “Baahubali 2” which earned Rs 46.71 crore on the third day.

Well, Ranbir has beaten all the big stars of Bollywood and it won’t be wrong to say that “Sanju” has given his career a much-needed boost! He worked very hard for it and his dedication paid off!

Let’s see how many more records the flick will break in the days to come. What do you say?

Manmeet Singh’s Latest Song Asli Sardarji Celebrates The Spirit Of Being Sardar. It’s Awesome
Ranbir Kapoor’s “Sanju” Has 4 Big Mistakes And We Bet That You Didn’t Notice Them