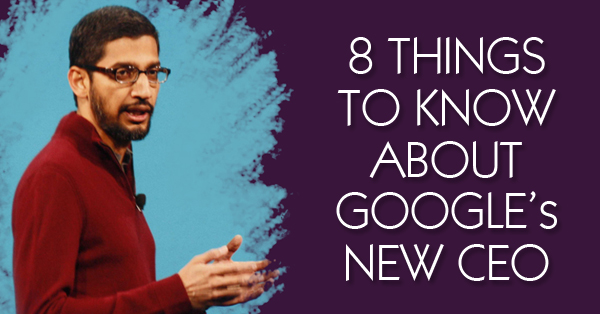 A man born and bought up in Chennai in early 1970’s is today an Internet Sensation & Role model to many. After Satya Nadella, Indra Nooyi, Ajaypal Singh Banga and few others here is another Indian who has made India & Indians proud.
Sundar Pichai ~ CEO of Google. A man who started off his career working for a Management consulting company has today reached to a height that entire world is watching him with respect. The decision is a part of a Restructuring in Google. Google recently announced the launch of its new Parent Company ALPHABET Inc which trimmed down the way for Sundar Pichai to become the new CEO of Google, replacing Larry Page. Larry Page who has stepped down his position in Google will now Head ALPHABET Inc with Sergey Brin as the President of the Company.
Heartily Congratulations to Mr. Sundar Pichai and his Family for his achievement and leading India as a Proud Nation.

But many of us till now do not actually know who SUNDAR PICHAI is or what did he work as or whom did he work for over the years. Here we bring you 8 things about the newly appointed CEO of Google ~ Sunday Pichai which you must know. Share and spread this with all your Friends. Let all the nations see what India is capable of.

This Extraordinary Fan & Crazy Lover Of Alia Bhatt Crossed All The Limits On Twitter
Find Out Why #PappuSoDuffer Tweets Was Trending All Day On Twitter!!