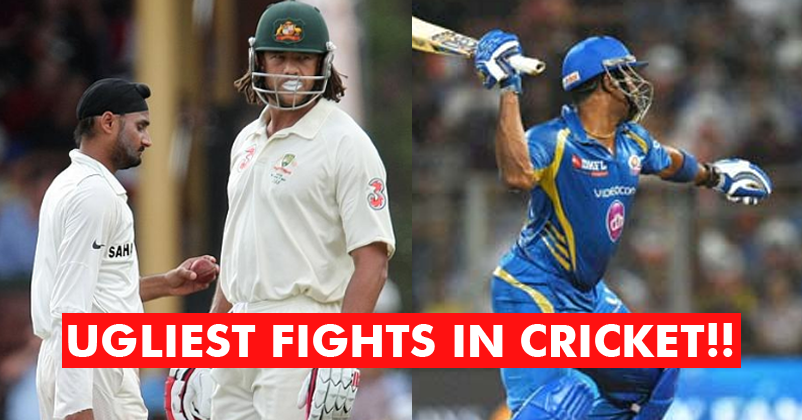 Cricket is known as gentleman’s game and it is followed by millions of people across the globe. There are expectations of millions of people from the cricket players, as a result sometimes they can’t keep cool and get angry to particular situations. Let’s have a look at some of the incidents when cricketers involved into fights. This is a very famous incident where Indian former opening batsman Gautam Gambhir and Pakistani all rounder Shahid Afridi got involved into heated argument. Gambhir thought that Afridi was deliberately blocking his way. This argument soon got converted into the extreme ‘Hindi Gaalis’ and umpire had to intervene in between. This is considered as one of the biggest fighting incidents in the history of cricket. There was some argument between Harbhajan and Symonds, later Symonds accused Harbhajan for racist comments. According to Symonds, Harbhajan abused him and called him ‘Monkey’. This incident went for judicial review and Harbhajan was later acquitted of all charges. This incident happened in IPL 2014 where the game was going on between RCB and Mumbai Indians. This incident happened when Pollard pulled his stance due to some problem, but Starc deliberately bowled the delivery towards Pollard, who was in no position to play the ball. It turned into an ugly incident when Pollard threw his bat towards Starc out of anger. This was most shameful act in cricket ever. This incident happened when Harbhajan hit a six off Shoaib Akhtar’s ball, after which Bowler lose his cool and bowled a lethal bouncer. Then there were exchange of words between both of them. However, Harbhajan won the battle by hitting a six and winning the match for India. This was one the ugliest incident in the cricket history. Javed Miandad was taking quick singles and Australian legend Dennis Lillee was blocking his way every time. After sometime Javed pushed Lillee, Lillee got angry and kicked Javed Miandad. Furious Javed tried to hit Lillee with his bat. This was very shameful incident. India-Pakistan cricket match brings exceptional tension between not only cricket fans but also the players. During a T20 match Kamran Akmal missed the ball and there was some exchange of words between Ishant and Kamran. This turned into dispute and they started abusing each other. Later umpires and players intervened and issue was resolved. This incident took place in Delhi test in 2008. Shane Watson had sledged Gambhir all morning, after a certain limit Gambhir got angry with some comments and hit Watson with elbow. After this incident Gambhir was fined by match referee.

When Inzamam got very angry We have seen many fights between the players on the field. But in this incident, former Pakistani captain Inzamam-ul-Haq involved in fight with the spectators. According to the reports, In a match against India Inzamam was not having great day. He only managed to score 10 runs off 34 balls and his team got all out at 116. When Inzamam was fielding on the boundary, a group from the crowd started taunting him. They started chanting ” Oye Mote, seedha khada ho. Mota aaloo, sada Aaloo.” After hearing these rubbish comments Inzamam got very angry and went into the crowd and started beating a guy. All of the ground staff shocked by this act of Inzamam. Afterwards Police took Inzamam back onto the field. This was very shameful act.