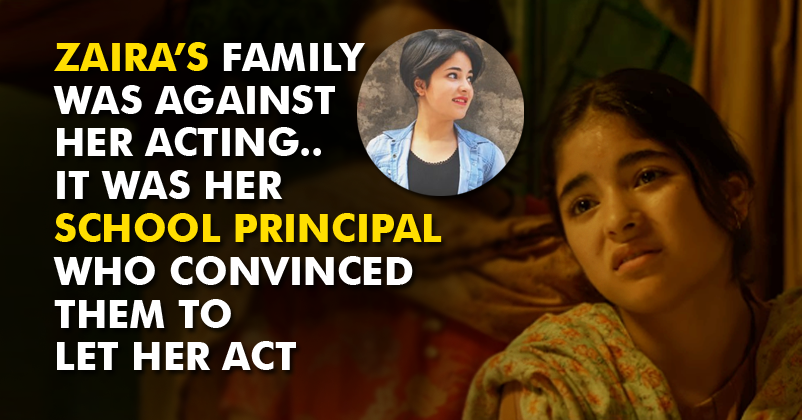 Zaira Wasim has lately been into the news for all wrong reasons where she was just clueless about the reasons. People dragged her into a lot of controversies and she was recently involved into a ‘chit-chat’ with our sports minister Vijay Goel. Her acting in Dangal movie was appreciated with a lot of love that made her come into the limelight apart from the controversies.

So this made people curious to know more about her, hence we are going share some of the facts about her. So let us get started.

1. She is just 16 years old and her acting skills are at par with many of the actresses of today. She gave her board exam from St. Paul’s International Academy under Jammu and Kashmir State Board of School Education.

3. She comes from a well to do family. Her father Zahid Wasim is an Executive Manager at Jammu and Kashmir Bank. Her mother Zarqa Wasim is a teacher.

4. The decision on acting. Her parents were against this decision and the profession, but it was her principal and her aunt who convinced her parents to let her follow her dream.

5. Her debut on TV Screen Before Dangal, her first appearance on the television screen was in a commercial that she did for a satellite television provider, that was shot in Gulmarg and another one for a smartphone brand in Almora, Uttarakhand.

6. The competition for the role of Geeta Phogat in Dangal wasn’t that easy. She had to go through the selection process which had more than 19,000 girls for the same role.

7. Her hobbies, her passion.

8. She has a great love for animals. She considers herself to be a shy person but a small friend circle, but she is quite attached to her cat.

Isn’t she amazing? What do you think about it? Share your opinion in the comment section below.

Continue Reading
You may also like...
Related Topics:zaira wasim facts

Legal Trouble For Akshay’s Jolly LLB 2! Petitioner Made A Demand Which May Be Difficult To Be Fulfilled
Ex-Bigg Boss Contestant Sonali Raut’s Fat-To-Fit Transformation Will Leave You Awestruck