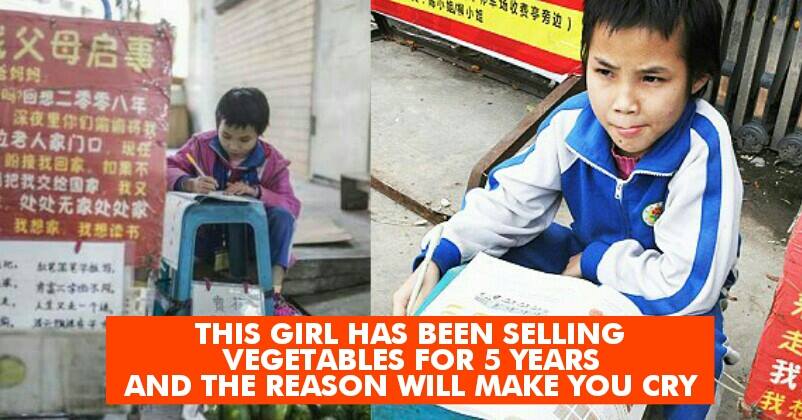 A Chinese girl of 8 yrs is presently the talk of the Internet as everyone wants her to get united with her parents who abandoned her when she was a baby. For quite a few years now, this little girl named Yang Xiuxia has been selling veggies on the street with a hope of meeting her parents.

As per The Daily Mail, the only thing that Yang has wished for, in the past 5 years, is to meet her parents. She presently lives in Lianhu, a village in Tangxia Town of southern China’s Dongguan city, and is better known as Mao Mao. It is said that parents of Mao Mao were migrant workers, hailing from Wenchuan city, Sichuan Province. On May 10, 2008, they left the village after leaving Mao Mao outside the house of a neighbor.

The neighbor, Huang Mengyi (70), was shocked when she heard the baby crying outside her house. She told,

“I opened the door and recognized she was the baby of that young man from Sichuan. I rushed to his home, but there was no one to be seen. He had left.”

The villagers believe that Mao Mao was abandoned by her parents because she was born prematurely as well as had pneumonia at that time. Huang has retired from military as a doctor and she takes care of Mao Mao as her own grandchild. Moreover, she and her husband have also raised Yang Hengqing (27) as their son who was also abandoned in 1988 by his parents. Mao Mao wrote in her diary,

“Where is my dad? Where is my mum? Dad and mum are in my dream with me. But when I wake up, I don’t see them.”

Mao Mao started selling veggies thinking that she might meet her parents some day while helping the family that raised her. She keeps a sign next to her stand which reads,

“Dear dad and mum, how are you? In 2008 when I was seriously ill, you secretly put me in front of an elderly woman’s house at midnight. Now I’ve recovered, I look forward to being picked up by you. Otherwise, my grandma will have to hand me to the government.” We pray that Mao Mao soon meets her real parents.

She Wanted Modi’s “Shiva Stole” What PM Modi Did Next Will Amaze You! Heartwarming Incident!
Modi’s Dream Is Cashless India! But What About Taxes Being Charged On Movie Tickets?