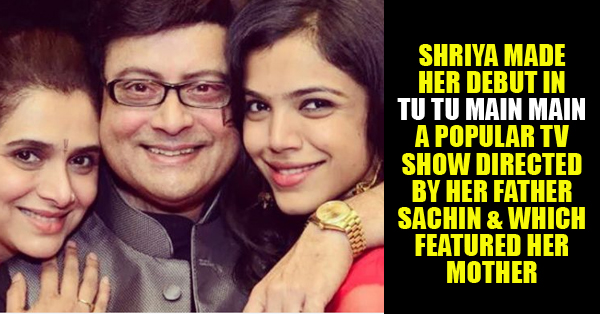 Sachin Pilgaonkar and Supriya Pilgaonkar are well-known faces in Marathi film and TV industry respectively. Now their daughter, Shriya Pilgaonkar made her debut into the film industry opposite the Bollywood Badshah Shah Rukh Khan in his recent film FAN. Shriya played the role of Neha and was seen in the Delhi sequence of the film with Gaurav Chandna aka Aryan Khanna’s fan in the film. Shriya’s role in the film is small but she managed the grab the attention for that.

We decided to let you know more about the young actress. Here presenting you 9 facts you should know about Shriya Pilgaonkar.

1. As her parents are in film industry she grew in the film environment. 2. Shriya made her TV debut on the popular show of 90’s ‘Tu Tu Main Main’, it was directed by her father and featured her mother. 4. She was seen in a Marathi film ‘Ekulti Ek’, directed by her father Sachin Pilgaonkar 5. Before debuting into Bollywood, Shriya was a part of a French film ‘Un plus une’. It featured Oscar-winning actor Jean Dujardin. 6. She also featured in an English play/drama called Internal Affairs 7. Shriya is a known face in the advt world, she worked with Shahid Kapoor in an ad. 8. Shriya is a trained Kathak dancer. 9. For her role in FAN, she had auditioned with 750 other girls before Maneesh Sharma selected her.