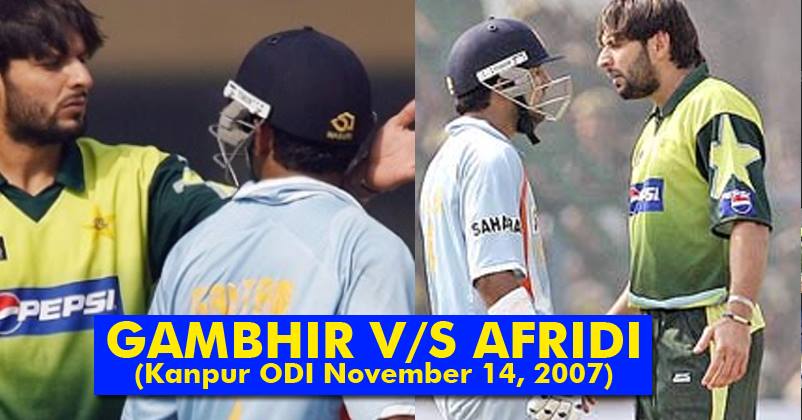 India and Pakistan share a big ‘F’ with each other. And that ‘F’ word is none other than ‘FRIENDSHIP’. Unlike the diplomatic politics played by both the nations, their cricket playing techniques are not so calm. There have been several instances when the players of these two countries have crossed the line that resembles just like the LOC. Yes, no one should cross it. And we all know who does it first ! !

So here I will be picking up some of the controversies ignited during India vs Pakistan which we can’t forget.

1. When Rahul Dravid lost his cool playing against Shoaib Akhtar in 2003 World Cup. Rahul Dravid and Shoaib Akhtar were engaged in a push-hush situation while Dravid was running back for his ‘double’. After completing his double, Dravid walked back and the duo exchanged few words. However, it was Inzamam Ul Haq who intervened and handled the situation.

2. When Gautam Gambhir showed Afridi how ‘GAMBHIR’ he is in terms of dominating his opponent. The venue was Kanpur, the year was 2007 and opponent was Shahid Afridi. Gautam Gambhir cleared a boundary and went on to rant Shahid Afridi and spelled out some few ‘DESI WORDS’. Afridi on the other end kept the same approach towards him. In the next ball, Shahid Afridi bagged a chance of an appeal for LBW. However, Gautam Gambhir managed to take a single but unfortunately or intentionally clashed with Shahid Afridi and then there was nothing no hold back.

3. When Venkatesh Prasad Showed Aamir Sohail the way to the dugout. Aamir Sohail was the first one to smash Venkatesh Prasad for a boundary and went on to provoke him by pointing out finger at him. But it was Venkateshwar Prasad who had the last laugh when he got Aamir Sohail bowled in the very next ball and booed him off the field with his aggressive and yet controlled celebration. It was again the Delhi’s angry young man Gautam Gambhir who had a face off with Pakistan’s wicket keeper Umar Akmal for appealing more than required behind the stumps. Both of them went on to bash each other during the drinks break, however Umpires and their team members intervened and stopped the situation from getting worse.

5. When Sreesanth and Inzamam Ul Haq had a cold and calm face-off. Sreesanth was a new lad back and was full of energy who bowled a brilliant spell against Pakistan, particularly against Inzamam-Ul-Haq. Sreesanth indeed tried to pressurize him by throwing away few words and moved back. However Inzamam-Ul-Haq came back strongly and started walking towards him while Sreesanth was going to the bowler’s end. Both of them wanted to show each other ‘WHO IS THE BOSS’ ! !

6. When Javed Miandad broke the ice with Kiran More. Till today no one has the idea about who got trolled that day. Javed Miandad complained to the umpires about Kiran More disturbing him. Later on in the next ball, Kiran More appealed for a run out while Javed Miandad was returning back to his crease after an unsuccessful single. Umpires dismissed his appeal and Javed Miandad started jumping off on the pitch. It was a complete fun in its own way.

7. When Harbhajan Singh and Shoaib Akhtar came all the way down to DESI THETTTT PUNJABI ! ! It was the final of Asia Cup and pressure was indeed on both the countries. Harbhajan Singh missed a chance to hit six and Shoaib Akhtar left no stone unturned to provoke him. Both of them exchanged quite a lot of words and the situation further intensified. However, at the last over of the match, Harbhajan Singh a six and the Punjabi style celebration began which definitely pissed off Shoaib Akhtar. It was Muhammad Yusuf who called for a runner-up since his elbow started bleeding out. However, it took him some time to rest on field. Saurav Ganguly on the other hand had more troubles waiting for him as he was afraid that he might be fined for ‘SLOW OVER RATE’. He asked Muhammad Yusuf and fellow Pakistani players to note down the time as he doesn’t want to land himself in trouble. He did show concern for Yusuf’s injury but was very particular for the chances of fine. It was all going down in an ugly spat.

9. When Umar Gul & Yuvraj Singh stared down at each other. It was a complete face-off when Yuvraj Singh and Umar Gul came against each other. Umar Gul bowled a brilliant ball to which Yuvraj Singh responded with a solid defence. When Yuvraj Singh started to go to the non striker end, Umar Gul and he engaged in some elbow wrestling. Although, later on the duo shared a mutual admiration and ended up the fight with a handshake.

We Will Never See India-Pak Cricket Match Again ! Here’s What BCCI Has Said About It !
You’ll Never Trust Haryana Govt After Knowing What It Did With Sakshi Malik’s Coach