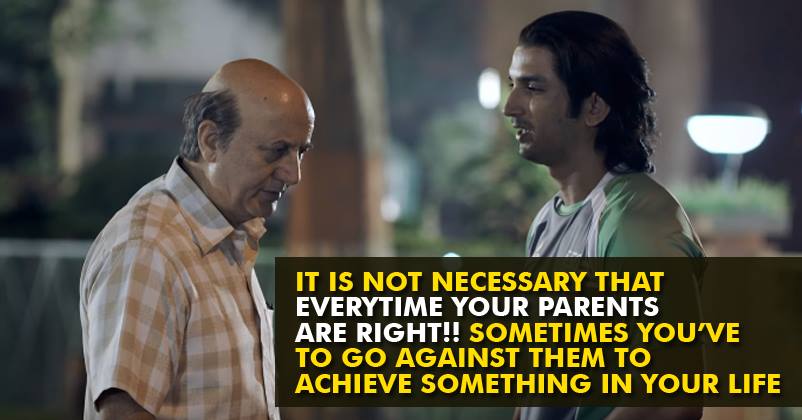 If we try to broaden our vision and look around us, every single damn THING teaches us something. If a thing has the potential to teach us various life lessons, just think about how much can we learn from our idols. M.S Dhoni is for sure one of the names that strikes in our mind when we talk about learning life lessons. His biopic is one of the best ways to learn about how to succeed in life no matter how strong excuses you have against it. Here are some of the life lessons that we should learn from M.S Dhoni.

1. Calmness is the best way to handle any situation. There is a reason why we call him ‘CAPTAIN COOL’ which he proved once again while he was playing his 2011 World Cup Final innings. Indian team lost two early wickets and pressure was right on him. But he handled the situation quite well and at last with his composure, went on to hit the memorable world cup SIX and helped India to win the World Cup after 28 years.

2. Always back your instincts and believe in yourself. At the initial stage of his childhood career, Dhoni was never allowed to hold the bat. He was constantly asked to focus on his wicket keeping skills. But it was Dhoni who trusted on his instincts and went on to bat in nets. Besides this, he also believed in himself and asked his coach to promote him up the order while he was playing for Inter School Trophy.

3. Introspect your weakness and work towards it. M.S Dhoni once lost to Yuvraj Singh. Both on and off the field. He could have blamed the pitch, overcast conditions and what not. But he simply admitted the fact that it was he who lost to Yuvraj Singh because he gave more importance to Yuvraj’s confidence rather than believing in himself. He did self criticise himself which is very important for self evaluation.

4. Life will knock you down, but its upto you to stand up and fight for what you deserve and dream off. Rejections and Bad Lucks were some of the few motivations that worked for M.S Dhoni. The letter for his selection in EAST ZONE TEAM was stuck somewhere in Dhanbad due to which he didn’t know about his selection. He was supposed to reach Tripura by catching the flight in the next morning from Kolkata. Somehow, he did manage to reach Kolkata all the way from Ranchi but couldn’t catch his flight. However, he didn’t lose hope and still fought to achieve his dreams. No matter who brought you into the team, if their performances are affecting the moral and spirit of the team, it is always good and advisable to drop them off. The decision of dropping off the 3 senior players wasn’t an easy decision for MSD. But for the sake of brighter future, he did it and was ready to take criticism for the time being.

6. Always stay grounded no matter how high you fly. Dhoni’s relationship with his friends stayed the same even after becoming a ‘BADA AADMI’. He knew his roots and how he struggled to reach to this feat in his life and that is why he respected the fame and the stardom which he got through cricket which was only possible because of his friends who taught him various shots like ‘HELICOPTER SHOT’ and ‘UPAR CUT’.

7. Dedication towards your passion will decide your future. Ticket collection from 9AM – 4PM in Kharagpur Railway Station and then straight 4 hours of practice wasn’t an easy task. But Dhoni made it happen just because he had the urge to play for his country and the dedication towards his passion.

8. Never allow your personal life to interfere with your Professional Life. M.S Dhoni always made it clear that his phone would be switched off during the whole tour. And this is how he was focussed for the upcoming matches. It didn’t matter who the other person was – his friends, his family members or even his girlfriend, when it’s about representing his country, he needs to be focused without any DISTRACTION ! !

None of us want to recollect the horrible memories of 2007 World Cup Failure. It was a complete mess but more messier was the way people reacted to it. However, M.S Dhoni didn’t bother much about these things and during his free time at that moment went on to repair his BIKE by himself. While fixing his BIKE, memories from 2007 World Cup flashed back and he got an elbow room to think and fix his batting techniques. And this how we should all try to embrace our failures and channelize it towards better future.

Hope you have got to learn a lot from him! Do share your views in our comments section below.

A Shut Up Call By Nana Patekar To All The Celebrities For Commenting On Pakistani Actors! Must Watch
Anushka’s Carefree Street Dance Is All You Need To See Today! Cuteness Overloaded!