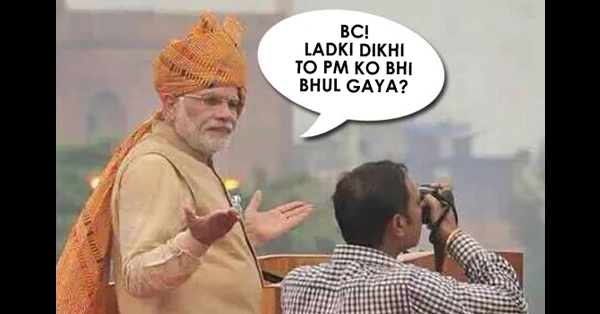 Today’s generation doesn’t give much importance to job, happiness, Family as much as they give it to the picture posted on Social media is given much importance. 😛 Almost everyone today is crazy about their photographs. Everyone want to look good in the Photographs. Upon that if the camera is a DSLR one then the desire to look good just doubles up. The moment people see some one with a DSLR in an event the first thing they do is try to look perfect to get a perfect picture.
Seems like out Prime Minister Narendra Modi is also one of the Picture Crazy persons. Every where he goes he ensures that he clicks pictures with his iPhone and he also make sures that he takes selfies. In the last 15 Months since he got he elected he had traveled to around 25 Countries and he has taken hundreds of photos during those tours. He is now well known on social media for this characteristic of his.
Recently on 15th August while he was addressing the nation a photo was taken which was perfectly timed to show as if Modi is annoyed by the photographer who is taking pictures of something else while Modi himself is standing beside him. 😀 So Social media used that picture in a better way and came with these 9 Viral Memes on Narendra Modi’s best picture which will surely make you laugh all the day. Twitter Flooded With #ModiInDubai. You Can’t Miss To Check Out How Users Reacted On His Visit
“PM Narendra Modi Is NOT A Rockstar” Says Shobha De & Faces Wrath On Twitter