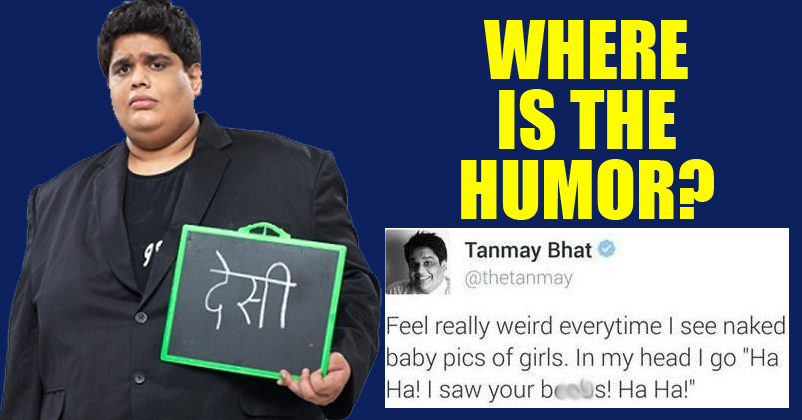 Tanmay Bhat seems to be the new name of controversy as his new spoof video “Sachin vs Lata Civil War” targets legends of cricket and music, i.e., Lata Mangeshkar and Sachin Tendulkar with mediocre jokes. He shared this video on his official Facebook page and needless to say, has continuously been criticized for the same on social media. However, it looks as if Tanmay is not at all affected by hate tweets and comments and appears to be in his own airy fairy world. In fact, when someone asked him to apologize over the disgusting spoof video, he simply denied. Well, this is not the first time when Tanmay has insulted anyone and in the past too, he has posted some tweets which sparked controversy as well as exemplify his senseless and ridiculous humor. In this article, we present some of the tweets made by the AIB stand-up comedian Tanmay Bhat which are idiotic and irrational to the core! Have you come across a more sickening thing ever? Oh yes, it’s more sickening than the above tweet: AIB stand-up comedians also made “offensive” remarks on Jesus Christ and the church and therefore, had to apologize: And this time again, Tanmay has invited ire and criticism of people from across the nation but on a sad note, he neither regrets nor apologizes for it.

Do share your views with regard to it in the comments section below.

He Scored 100/100 In Economics But Still Failed By Big Margin! Check Out Funny Marksheet
Johnny Lever’s Daughter Jamie Has Grown Up & She’s As Skilled As Her Father