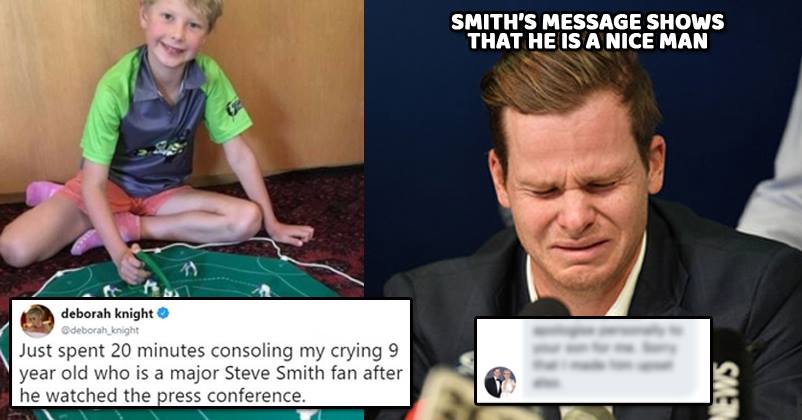 Yesterday, we saw how Steve Smith broke down in a press conference & apologized to all his fans. We too are heartbroken that Smith has been banned for a year now.

After seeing Smith in tears, many fans couldn’t control their emotions. After the incident, Smith and Warner were treated no less than criminals, however there were fans who offered total sympathy.

However, there was one fan who was too upset on seeing Smith cry. His mom, a reporter of Channel Nine, took to Twitter to reveal how she just couldn’t control her son’s tears. 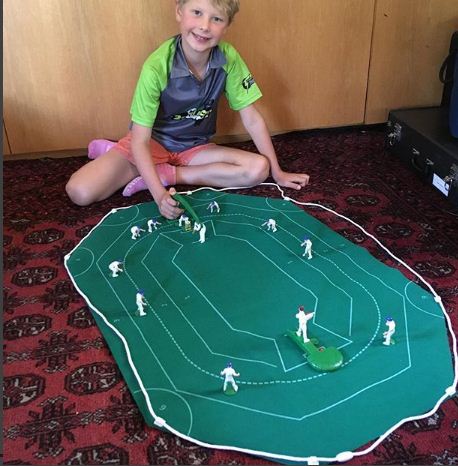 Just spent 20 minutes consoling my crying 9 year old who is a major Steve Smith fan after he watched the press conference. Encouraging him and all kids to write Steve a letter telling him how much you love and admire him.

“Just spent 20 minutes consoling my crying 9 year old who is a major Steve Smith fan after he watched the press conference. Encouraging him and all kids to write Steve a letter telling him how much you love and admire him.”

The moment Steve saw this message, he asked Deborah to apologize to her son. Yes, he sent her a direct message on Twitter & Deborah shared the screenshot of the same on Instagram.

Here’s the conversation that Smith and Deborah had:-

Steve Smith – Could you please apologise personally to your son for me. Sorry that I made him upset also.
Deborah – Thank you so much for making contact Steve. My son wants you to know he admires you even more than he did before for the way you are handling yourself in all this. You are loved and admired and we know you will emerge from this stronger than ever. Heal and spend time with your family.
Steve Smith – I’m glad I’ve got his support. Thanks a lot

Deborah shared it on Twitter. She wrote how surprised and humbled she felt;

Surprised and humbled that @stevesmith49 has taken time to contact my son directly to personally apologise for making him so upset. He’s told Darcy that he’s glad he his support.

Well, this response of Steve to a 9 year old upset fan is too classy & we appreciate it.

Dhoni Was Almost In Tears While Speaking About CSK’s Return. Video Is Emotional
Gautam Gambhir Comes In Support Of Steve Smith. Says He Doesn’t Look Cheat To Him