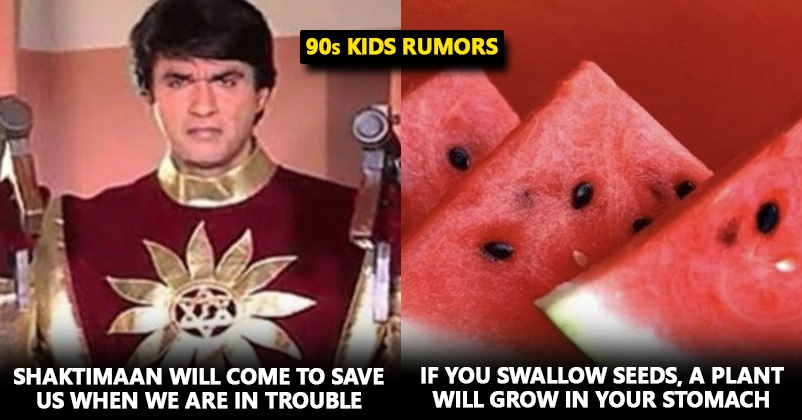 Change is the only constant thing in this world and every generation feels that their childhood time was the best. With the advancement in technology, new products are coming in the market which are making our lives easy and enjoyable but because of them, we are losing the feeling of personal touch.

#90sKidsRumors was trending on Twitter and people from the 90s were sharing some special things or rumors from their childhood. They are talking about the TV serials that they watched, favourite toffees, games which were played by them and also about many rumors that were considered true by the kids of that era.

Many used to believe that if they eat or swallow the seeds of watermelon, a tree will grow in the stomach while slam books have also been an important part of students’ lives. The kids of 90s used to play book cricket in class while today it is difficult to find the kids of today in the ground because most of them prefer to play video games.

No kid of 90s can forget how important serial Shaktimaan was for them and missing an episode of it was something that a 90s kid would never even think of doing. Some children even believed that if they were in trouble, Shaktimaan would come and save them.

Here are some selected tweets that will make you nostalgic if you are a 90s kid:

#90sKidsRumors
book cricket 🏏
every class was a stadium😂 must played by 90's gen.. pic.twitter.com/SUneycF2pt

I use to think that the advertisement on the grounds are real boards #90sKidsRumors pic.twitter.com/ZsEcIMioQ7

TV serials from 1990s that made our childhood awesome !!!#90sKidsRumors pic.twitter.com/gyObN3GnDx

As a kid, who else thought when yu ate a watermelon seed a watermelon would grow inside ur stomach😁😁 #90sKidsRumors pic.twitter.com/agHScA8DLf

If you find your broken eyelash, your wish comes true if you blow it putting on your fist. #90sKidsRumors

One another game that test your intelligence, greater than chess.#90sKidsRumors pic.twitter.com/edbhtq1bVd

Shaktimaan wil come to save us when we r in trouble😅 Those Days wer simple n Fun #90skidsrumors pic.twitter.com/j59ciL1X4l

The best indoor national game of that time.

How many of them could you relate to? Let us know.

Mamata Banerjee Sat On Dharna Against Modi Govt; Twitter Flooded With The Most Hilarious Memes
This Guy Photoshopped Pics Of Celebs With Their Younger Selves, The Results Are Mindblowing