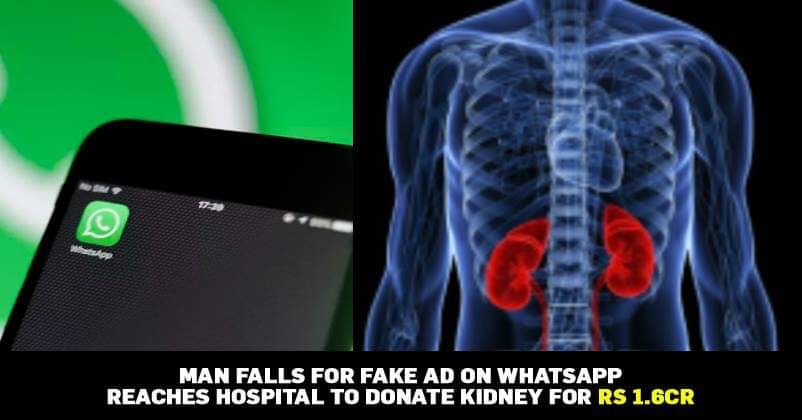 In a country where the population is 1.7 billion and human trafficking is still an actual problem, it is no surprise that a Bengaluru man came inches from selling his kidney to an impersonator.

MB Somashekar is a sternographer from Bengaluru who was in dire need of money when he came across an ad on the internet that claimed he could get a whopping ₹1.6 cr for one of his kidneys.

Scams and malicious ads like these are very common on the internet. Such scams also come in the form of Phishing emails and WhatsApp messages and have become increasingly adaptive and wide ranged. We recently covered a report where Olx buyers were being duped by scammers posing as Army personnel. Keeping in line with the same pattern, Somashekar was browsing the web one day where he came across an ad from a very well known senior doctor named Arun Wesley David who works at the Columbia Asia Hospital in Bengaluru.

After following the ad, Somashekar encountered a phone number where the impersonator claimed to be Dr David himself. Somashekar had vivid conversations regarding his transplant over WhatsApp before making the decision and they even talked over the phone where the culprit promised him ₹1.6 cr. in exchange for his kidney.

The man posing as Dr. Arun Wesley David then asked Somashekar to proceed to the hospital where he could get the formalities completed. Somashekar was even asked to carry his Aadhar card and other identity proofs for identification purposes. After entering the hospital, Somashekar checked in with Aprajita Dhal who is the transplant coordinator at Columbia Asia.

The conversation soon turned into panic for Somashekar when the hospital completely denied the claims and even got in touch with Dr. David who confirmed that he knew nothing about the transplant. It was later revealed that the impersonator had been using a totally different phone number and identity to scam Somashekar.

Dr David has filed a complaint with the Cyber Crime branch of Bengaluru Police under Section 66 ( c) and 66( D) of the IT Act of 2000. The concerned doctor has also filed a complaint for criminal conspiracy, forgery and cheating as he is concerned about the people that will be scammed using his fake identity.

This incident is yet another red flag when it comes to the internet savvy population of our country. People need to be aware of safe cyber space practices and stringent protocols should be in place to prevent such identity thefts. What do you think about the incident? Share your thoughts with us in the comments below.

AAP Tweeted Pic Of Netherlands’ Erasmus Bridge As Delhi’s Signature Bridge, Got Trolled Mercilessly
Do You Know Why Most Banks And E-Commerce Retailers Use A 6 Digit OTP?