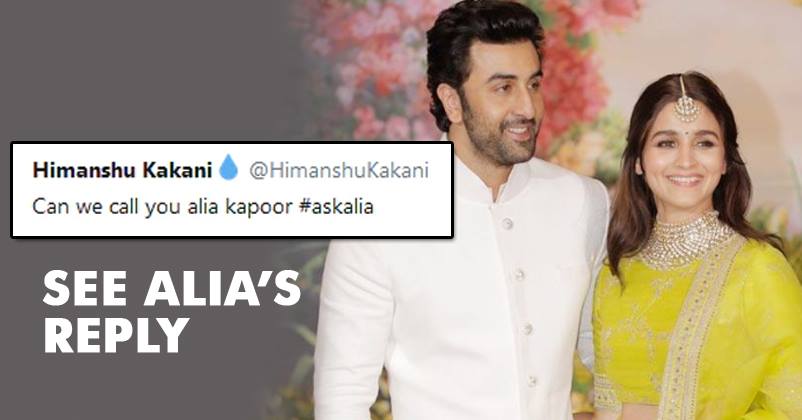 Alia Bhatt and Ranbir Kapoor’s affair is one of the hottest gossips of BTown. After the couple confirmed that there’s something really special between them, Alia Bhatt’s dad Mahesh Bhatt also confirmed.

Talking about the same he said that it doesn’t take a genius to understand that they are in love.

Now fans are fans and they love to spice up the things. It’s a season when actresses are changing their last names after marriage. Sonam Kapoor became Ahuja, Priyanka Chopra became Jonas and now Alia Bhatt’s fans also want to use Kapoor as her last name.

During a recent #AskAlia session on Twitter, a fan asked Alia if they can call her Alia Kapoor?

Can we call you alia kapoor #askalia

Can we call you alia kapoor #askalia

Alia gave a stunning answer to his tweet and asked him-

Can I call you Himanshu Bhatt?

Can I call you Himanshu Bhatt? https://t.co/3jRIcZLEzK

Well this is how you slay them tricky questions. Well done Alia!

Meanwhile, Alia and Ranbir are currently shooting for their upcoming film Brahmastra. The mega budget film will be the first part of a triology which is being directed by Ayan Mukerji. The film also starring Amitabh Bachchan in lead is slated to release in Christmas week of 2019.

10 Movies Which Trended On Top As Per Google India. Even Hollywood Films Are There In The List
Varun Dhawan Called Sonakshi Sinha Bhabhi On Instagram. Whom Is She Dating?