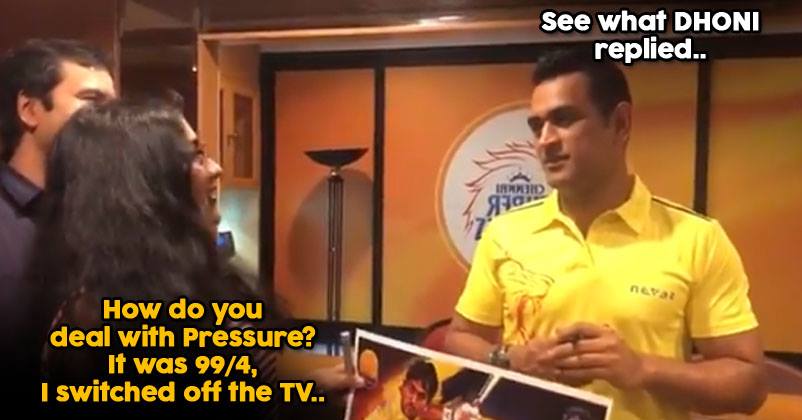 We have seen many fans breaching the ground security during an ongoing match to meet their favorite player but they don’t get much time to spend with him as the security people escort them out. However if a fan gets to spend a little time with the CSK skipper, he/she should ask for some golden words from the living legend.

Recently, a female fan of Dhoni got a chance to meet the former Indian skipper and after getting clicked with him, she asked him about one of his knocks that he played against Australia in the recently concluded ODI series. She wanted to know how the captain cool pulled it off and helped the team in winning the match and Dhoni’s answer was just awesome.

The fan was talking about the first ODI played against Australia in Hyderabad in which India was given a target of 237 runs but the strong batting lineup of the Indian team fumbled and at one point of time, the score was 99/4. Then Dhoni (59 not out) and Kedar (81 not out) made sure that India wins the match.

In response to the fan’s question in which she asked as to how he deals with pressure, Dhoni said that it is always about the process as it is more important than the result. He also correlated it with the studies as the focus is on studies and not on the result.

Dhoni has been a guiding force and inspiration for his CSK teammates as he has helped them in performing well and winning the title three times. In fact, he is an ideal for many youngsters of India and the best thing that everyone should learn from him is how to remain calm in critical situations.

IPL 2019 Will Not Be Broadcast In Pakistan, Here’s What You Need To Know.
Gambhir Criticises Kohli’s Captaincy & Says He’s Lucky To Survive In IPL. This Is How Virat Reacted