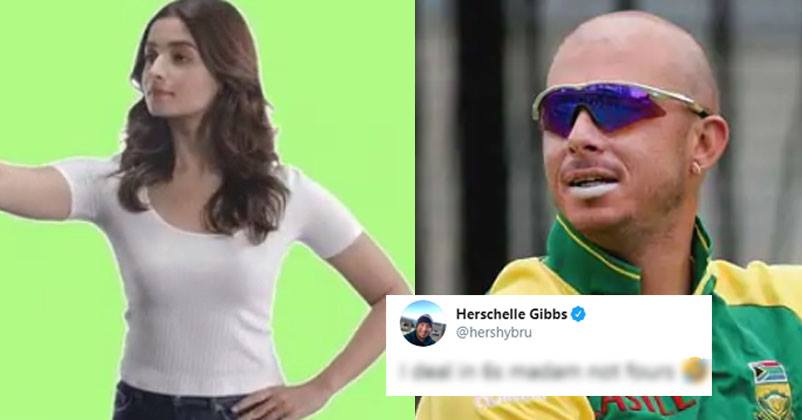 Famous Bollywood actress Alia Bhatt is the heartbeat of the nation. She has given some hit movies and is loved by masses. But the Twitter was left shocked when the South African former cricketer Herschelle Gibbs failed to recognize the Kalank actress.

Gibbs who was in the game for 14 long years recently shared a GIF featuring Alia on Twitter, not knowing who she really is.

It all started with a normal good morning tweet from Gibbs. On Monday, with a very cheerful mood he tweeted, “Morning 👋 birds are tweeting so I’ll do the same and say have a good one folks😆”

Gibbs caught Indians off guard and they questioned him if he knew who she was. To which he replied, “I have no idea who the lady is 🤷‍♂️”

Later when he got to know about her he tweeted, “Didn’t know you were an actress @aliaa08 but nice gif👏👏”

Didn’t know you were an actress @aliaa08 but nice gif👏👏 https://t.co/XEUxALcR34

In reply to Gibbs’ tweet, Alia also posted a GIF of herself followed by a smiley emoji. In the GIF, Alia can be seen giving four signal, referring to the game which Gibbs play.

Now Gibbs answered Alia in the most epic way and wrote, “I deal in 6s madam not fours 🤣👍👍”