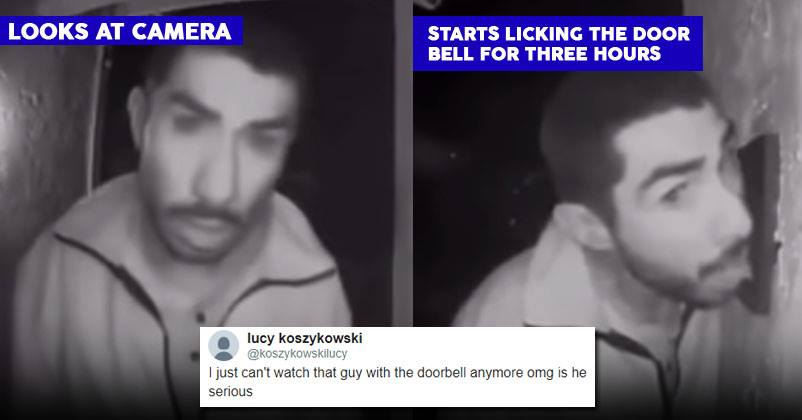 Trust social media to show you things which you never imagined and saw in your life. Each day we get up with something really interesting or weird trending on the social media and today is no different.

A video is all over the social media in which we can see a man licking the doorbell. Don’t believe it? But it’s true and you can’t watch it below-

While we all have licked something or other in life, it’s totally disgusting to lick a doorbell and this man did it for hours. The man has been identified as Roberto Daniel Arroyo who belongs to California. Roberto was captured by a CCTV camera while licking the doorbell and the video has been going viral on the social media since then.

Reportedly, the ma is on a run and the California police is in search of him. Meanwhile, have a look at the reactions of Twitterati-

Thankfully it isn’t here in Michigan or his tongue would still be attached to the doorbell.

Was the guy high? It’s okay if his doctor prescribed it 😊

Too gross
One for the books
Wanted the bell rated are or does it come in Pg 13 ? 😂📸😋hahaha

Uh, he wasn't trying to kiss that doorbell, lol. He was going down on it.

Continue Reading
You may also like...
Related Topics:Doorbell licker

Pakistan Has Elected Gulab Jamun As The National Sweet, Twitter Is Not Happy About It
These Prime Jokes & Memes On Jeff Bezos’ Divorce Are Too Funny To Miss