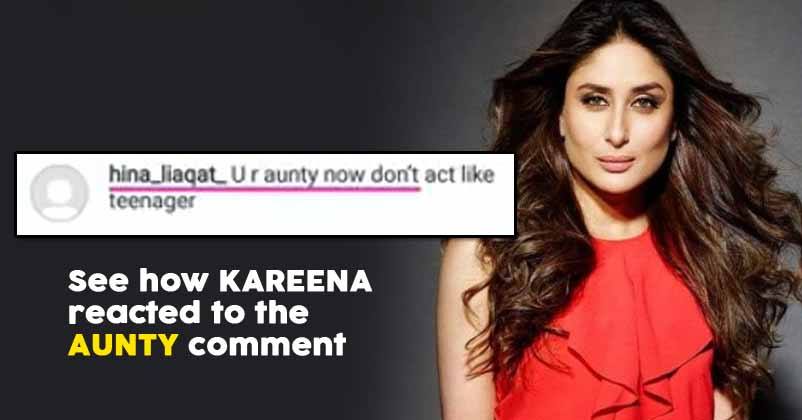 Getting trolled on social media is nothing new for Bollywood celebrities, especially for the actresses as they are quite often mocked not only for their dresses but also for their age and figure.

Kareena Kapoor Khan is one of the most popular actresses of the Hindi film industry with a huge fan following. Even though she is not very much active on social media, she still sometimes gets trolled by netizens on various occasions.

Very soon we will get to watch her on Arbaaz Khan’s chat show that has been titled as “Pinch”. In a video released by QuPlay, fans will see the “Jab We Met” actress expressing her annoyance on the matter of online trolling and slamming.

The promo shows her reading a tweet in which a social media user wrote that Kareena is aunty now so she should stop behaving like a teenager.

Quite naturally, this type of comment did not go well with the actress but we will have to admire her maturity and sensible attitude as she conveyed her thoughts without offending anyone’s feelings.

This is what Kareena said in response to the troller’s comment,

“People are just so ignorant towards celebrities’ feelings and emotions like as though celebrities, actors and actresses don’t have any feelings. We have to just take everything.”

Kareena’s last movie “Veere Di Wedding” performed well on the box-office and presently, she is busy with the shooting of “Good News”.

Other than Kareena Kapoor Khan, many other celebrities including Karan Johar, Kapil Sharma, Sonakshi Sinha, Sonam Kapoor, Sunny Leone, Nawazuddin Siddiqui etc. will be attending Arbaaz’s show. “Pinch” will be of 10 episodes and will be streamed online on QuPlay’s YouTube channel once in a week.

After Release Of “Badla”, Big B Asked About His Next Job On Twitter. Check Out Shah Rukh’s Response
Varun Dhawan To Marry Natasha Dalal In December 2019? Here Are The Details.