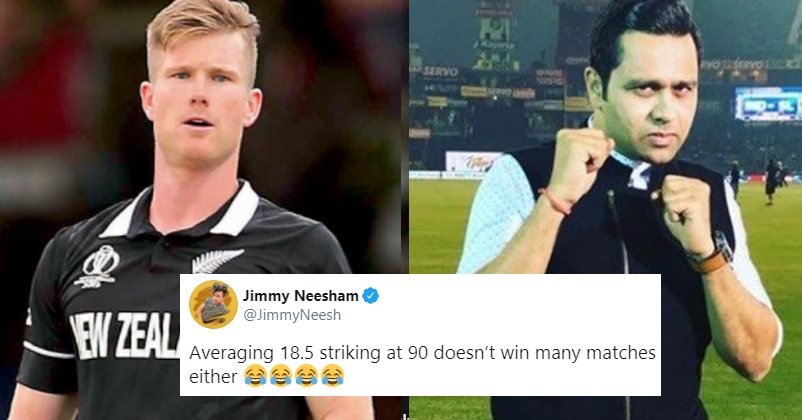 The IPL team Kings XI Punjab is going through a rough phase as they have lost 3 out of 4 matches which they have played and a couple of them were pretty close ones. The last match that they lost was against Mumbai Indians and after this, many cricket experts slammed the management for their team selection and strategy.

Former Indian cricketer Aakash Chopra who is a very popular commentator now was also very critical of KXIP and questioned the decision of playing the Kiwi player Jimmy Neesham as Chopra feels that Jimmy is not a match winner. In the match against Rohit Sharma-led Mumbai Indians, the Kiwi all-rounder gave 52 runs in his 4 overs and he also disappointed with bat as he was out for just 7 when his team needed to chase the target of 192 runs.

Now, James Neesham has responded to the comment made by Aakash Chopra and he took to Twitter to make fun of the latter’s statistics in T20I cricket.

Jimmy tweeted, “Averaging 18.5 striking at 90 doesn’t win many matches either” with laughing emojis.

He tweeted this when a Twitter user asked him to respond on the statement given by Aakash Chopra. Here is the tweet:

Aakash Chopra responds soon and accepts that he is not picked anymore due to his bad T20 record. But he adds that now he is paid for something else and at the same time, he took a funny jibe at Jimmy. Aakash says that he is happy Jimmy has no problem with the observations that he has made but with his stats.

Here is what Aakash tweeted: “Correct my friend. That’s why nobody picks me anymore. I get paid for doing something else I’m glad that you don’t have an issue with my observations but with my cricket stats. Go well for the rest of the #IPL.”

Correct my friend. That’s why nobody picks me anymore. I get paid for doing something else 😇🤗 I’m glad that you don’t have an issue with my observations but with my cricket stats. Go well for the rest of the #IPL. https://t.co/FFuYAyFtMZ

Jimmy Neesham and Aakash Chopra both are known for their sense of humour and wittiness and it will be interesting to see how Jimmy reacts after this response from Aakash.

Chahal Shares A Beautiful Pic With Adorable Caption For Dhanashree, Gets A Reply From Her
Harbhajan Singh Backs Irfan Pathan Over His Tweet On Dhoni’s Age After CSK’s 3 Losses In A Row