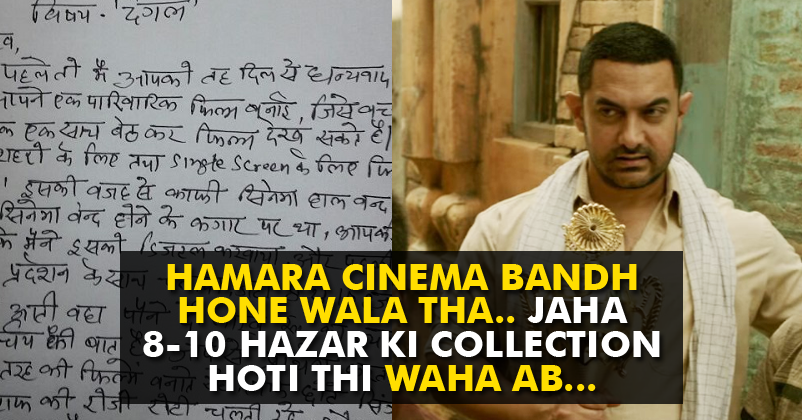 There was a time when a small fraction of our society went mad on Aamir Khan’s infamous ‘statement on intolerance’. But today, we have millions of people showering their love against the few derogatory remarks made on Aamir Khan. The sheer brilliance of his talent in DANGAL movie won everyone’s heart and closed the mouths of his haters. Aamir Khan’s Dangal movie in a way touched everyone. The movie brought the members of the family closer to each other with better understanding, and from the financial point of view, the movie helped in the betterment of the lives of single screen owners. This can be said by observing a series of letters that were sent by them (owners of the single screen theaters) to Aamir Khan where they thanked him for coming up with such a brilliant movie and bringing them back to the business.

There is no denying the fact that the year 2015 and 2016 witnessed a lot of major flops and new lows in the world of cinema when it came to quality of products (movies). The biggest brunt of it was paid by the distributor, exhibitors and the owners of movie theaters who were left shocked as very few people turned out for watching movies. However, after the release of ‘Dangal’ movie, the theaters came back to life with a bang, and hence, the business started once again like the old days. And this why, various distributor, exhibitors and owners of movie theaters wrote letters to Aamir Khan, thanking him for making such a wonderful movie. Here are some of the images of the letters.

This letter was sent by the Madhuban Cinemas which requested Aamir Khan to make more such good movies. The owner of this cinema hall was on the verge of shutting down his business, but it was Aamir Khan’s movie that helped him make profits and the confidence to keep running this business. Another letter was sent by the City Cinema from Raigarh where the owner congratulated and thanked Aamir Khan for making a movie like Dangal that can be seen along with the family members. He made a valid point by stating out that Indian cinema industry doesn’t lack movies but rather GOOD movies that have the capacity to bring people back to theaters. There are a lot of letters like these where people from all over India thanked Aamir Khan for making a family movie in a world where skin show is predominantly becoming a trend and sling shot technique for making more money. What are your views on this issue? Please share your opinion in the comment section below.

Bigg Boss 10: You’ll Be Heartbroken To Know Which Contestant Is Evicted This Week!
OMG! Ranveer Singh Spotted In Pakistan? But Wait, He’s A Look-Alike! What A Resemblance!