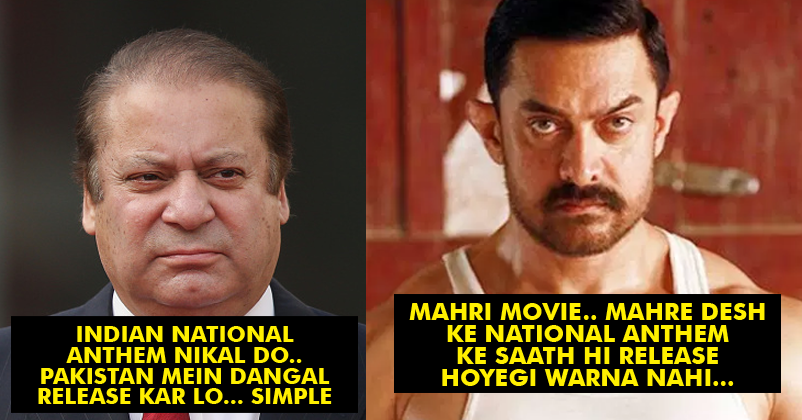 The screening of Indian movies was stopped in Pakistan for a temporary period last year when Indian Motion Pictures Producers’ Association (IMPPA) imposed a ban on Pak artists after Uri attacks in September.

Nevertheless, Pak removed this ban earlier this year and started screening Hindi movies there. There have not been many days when Pakistan’s local distributors urged for the release of Dangal and the Dangal team including Mr. Perfectionist was “absolutely okay” with it, taking into consideration the fact that Pak viewers like Hindi movies and Bollywood artists. As per HT, the movie couldn’t be released and the reason was a “surprising” demand. Here’s what a source revealed,

“When the film went to the Pakistan censor board, they were fine with it except for two particular scenes towards the end — one in which the Indian flag is shown and another in which the Indian national anthem is played after Geeta Phogat (played by Fatima Sana Shaikh) wins the gold medal. The Pakistan censors wanted the scenes to be edited out before they gave Dangal the green signal.”

However, Aamir Khan, who also happens to be Dangal’s producer, was of the opinion that “demand for the two cuts was surprising, because the film isn’t jingoistic in nature”. “It’s a sports-based biopic with no direct or indirect reference to Pakistan. The film only highlights India’s nationalistic sentiment, so what is the reason to chop off those scenes?”

Aamir made up mind of not releasing Dangal in Pak. Just to inform, Dangal is Bollywood’s biggest blockbuster and did a business of Rs 385 crore in the domestic market. The source further said,

“It will result in an economic loss to the tune of Rs 10-12 crore, as Pakistan is an important international territory vis-à-vis money, but he isn’t willing to edit the scenes in question. He is aware that not releasing the film could lead to piracy, but he is sure about what he won’t do.”

Aamir Khan was unavailable to make any comment on the matter; however, the news was confirmed by his spokesperson who didn’t disclose details.

Twitter also reacted over Aamir’s patriotism and praised him. Here are few tweets:

This guy is BRILLIANT and he keep doing this..i alwys respect him #amirkhan

Salute for his true patriotism:

I salute Mr. Amir for such true patriotism.

For Dangal release in Pak, distributors there ask Amir Khan to edit climax, remove national anthem & tri colour. He tells them to scoot