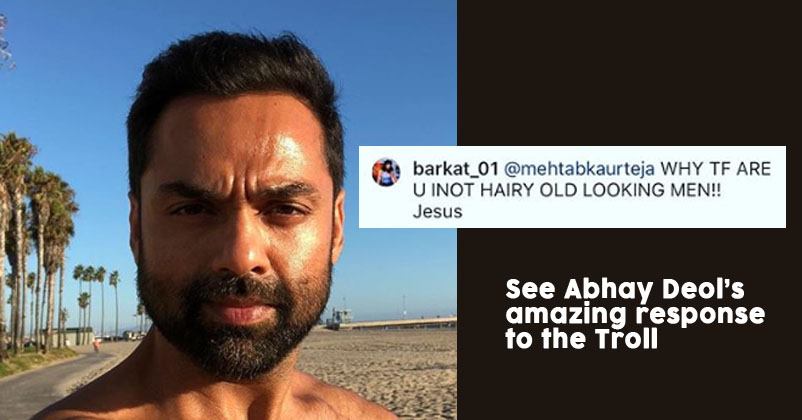 Abhay Deol has been away from the silver screen since a long time but he was last seen in Netflix original Chopsticks. Abhay Deol is making headlines, not for his films but for his magnificent sense of humour.


The actor posted a shirtless picture of himself on his Instagram handle back in September last year with the caption, Bare bear on a bike path! #fitness #outdoors #cycling #dontcareifyoudontlikechesthair #nofilter #allnatural #hashtag.

The Bollywood actor’s picture was filled with comments for looking sensational and charming. Seems like Abhay happened to come across the comments now. A fan left a comment on his picture saying ‘let’s just say the reason for my death will be this picture’ to which another girl replied ‘WHY TF ARE YOU INTO HAIRY OLD LOOKING MEN!! Jesus.’

Well, the actor posted a collage on his Instagram handles mentioning one of the comments. By posting this particular collage Abhay gave his fans a glimpse of his phenomenal sense of humour. Abhay posted the picture with the caption, “WHY TF ARE YOU INTO HAIRY OLD LOOKING MEN!! Jesus.” MADE ME LOL! #lostmyrazor #cantdoshitaboutageing #waittillyourturncomeslove

Abhay added hilarious hashtags which are enough to give a befitting reply to the troll. Well, netizens are praising the actor for taking the comment of the troll humorously.

I believe the actor is ageing like fine wine and his sense of humour makes it a perfect combination like cheese and wine!