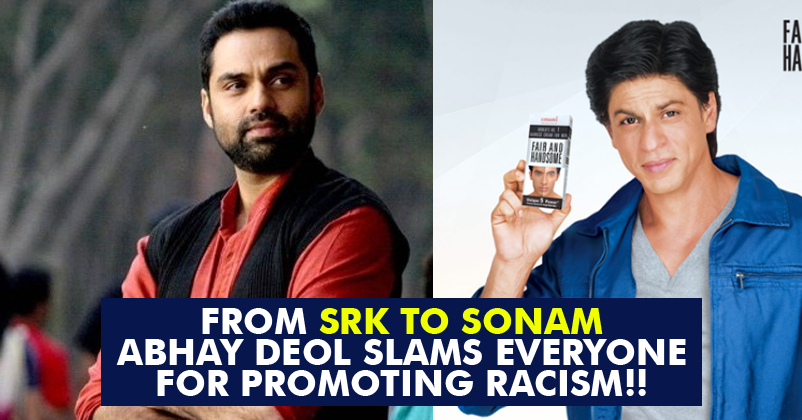 Abhay Deol is someone who has always come out in open with his thoughts unfiltered and unapologetic.

The actor who is known for his exceptional acting skills and unconventional choice of roles has taken the time to raise his concerns over racism.

Well, if you are thinking he is putting up some preachy messages on his social media then that is not the case.

The actor has taken a sarcastic dig at all the leading Bollywood stars who are endorsing products that make you ‘fair’.

We all know who these stars are but Abhay Deol has some hilarious insightful sarcastic opinion on each of them.

We can’t help but share all of them right here:

With that, the next on the list was the beautiful ‘white beauty’ Ileana D’Cruz

This one was sad, even Vidya Balan endorsed the idea of becoming fair but Abhay tried his best to defend her or maybe not!

And then we had our favorite Deepika Padukone, Abhay was pretty sweet to her too

And his co-star from Aisha, Sonam Kapoor was also on his list

After being the bitter sweet to these celebs in his post, he was nice enough to bash the idea of ‘dark is beautiful’ if only people knew the meaning of sarcasm then Abhay’s idea will hit the bull’s eye.

Nandita Das’ powerful message against racism and Abhay Deol’s sarcastic take on it:

He then posted this message to end the debate;

There’s a lot more of these campaigns that are blatantly, and sometimes subtly, selling you the idea that whiter skin is better than darker skin. No one at the top of their game in any field is going to tell you that it is demeaning, false, and racist. You have to see that for yourself. You have to stop buying into the idea that a particular shade is better than others. Unfortunately if you look at matrimonial ads you will see how entrenched in our psyche this belief is. We even use the word ‘dusk’ to describe the colour of someones skin! While an individual may not be able to change this attitude in his/her community, he/she can at least start with the family.

While we do not endorse the idea of becoming fair is equivalent to becoming beautiful. It is a world full of pre formed opinions that today fairness has become a criteria for good looks. We believe and stand by our thoughts that dark, fair, dusky, wheatish, any color, creed or sex is beautiful in their own way.

We totally support Abhay Deol’s stand against racism, influencers should take charge and refuse advertisements on the same.

Akshay Kumar Finally Speaks Up On Being Accused For National Award Win! Here’s What He Said
Karisma Hasn’t Let Divorce Affect Her Life! Her Latest Pics Are Filled With Positivity & Happiness!