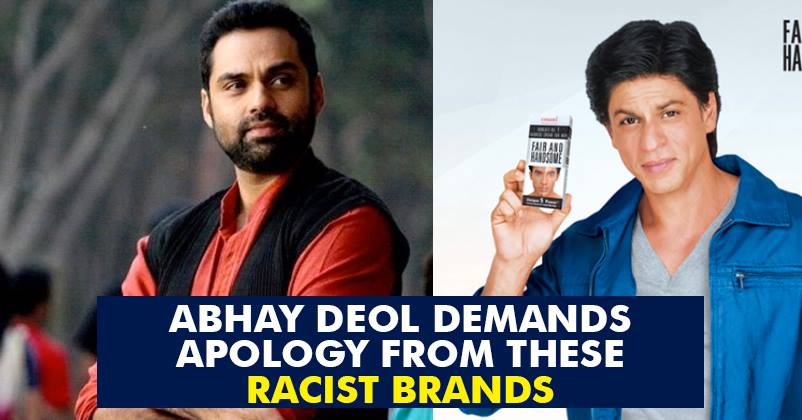 Abhay Deol had recently raised many eyebrows by calling out the big names in Bollywood and slamming them in his series of Facebook post for endorsing fairness creams.

The netizens were supporting Abhay and they all praised his opinion and effort. He even had some clash of words with his Aisha co-star Sonam Kapoor. However, the actor again sparked the issue of racism by brands and this time he spoke about how the brands who are promoting fairness creams should apologize.

Skincare brand Nivea ran a campaign in their latest ad ‘White is Purity’ and it was an ad of deodorant. It had a tagline “Keep it clean, keep it bright. Don’t let anything ruin it.”

The social media ruined the brand so bad that it had to take down the ad as well as apologize to retain its brand name.

“Did you guys know that Nivea issued an apology for an ad after pulling it down? Here’s part of the quote – “Diversity and inclusivity are crucial values of NIVEA. We take pride in creating products that promote beauty in all forms. Discrimination of any kind is simply not acceptable to us as a company, as employees, or as individuals.” You think we as Indians can get an apology from the brands who are saying this everyday in our country? Or maybe they don’t have such values. Just a bottom line.”

Abhay Deol posted about the same, he highlighted how German company Nivea pulled down its ad for being racist, can Indians do the same and ban an advertisement for being racist or are we totally giving into the consumerism?

Troubles Don’t Seem To End For Kapil Sharma! One More Celebrity Cancels Shoot For His Show!
Kapil’s Show Will Have A Special Villain Themed Episode & You Won’t Believe Who The Guests Are!