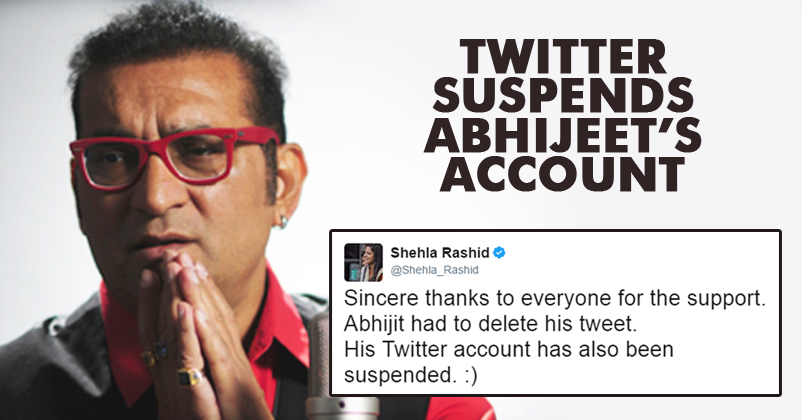 Renowned singer Abhijeet Bhattacharya often posts offensive and sexist tweets on his Twitter handle. Sometimes, his tweets are totally against the community rules of Twitter. If your point of view is against that of Abhijeet, you are sure to be abused by him, but not anymore as Twitter has suspended his account for flouting the guidelines. This time, the singer went way too ahead with his offensive tweets against some women and Twitter had no option but to suspend his account. One of his insulting tweets was against Shela Rashid, a JNU student activist; after seeing his tweet, she filed a complaint against him.

His derogatory remarks created a rage on social media and ultimately his account was deleted. Abhijit is a BJP supporter and so, when Shela made posted an anti-BJP tweet, he abused her.

To this, Abhijit replied,

He wrote, “There is rumour she took money for two hours and didn’t satisfy the client… Big racket”

Abhishek’s tweet created a lot of controversy and eventually his account was suspended. Here’s the screenshot of the same. Other tweets were against Swati Chaturvedi, a famous journalist, who had already lodged a complaint last year in July.

In another offensive tweet, he told a woman “You Ms Pak. Tell me your cage no? Will reach there… Will do the favourite pose.”

After this, Shela took to Twitter to thank everyone for their support.

When asked about this suspension, Abhijeet blamed people supporting JNU and author Arundhati Roy for it.

What do you have to say about the matter? Share your thoughts in our comments section below.

These Famous People Have Weird Eating Habits & It Will Leave You Stunned! Want To Know?
Zaheer-Sagarika Engagement Ceremony Was A Glitzy Star-Studded Affair! Check Out Pics!