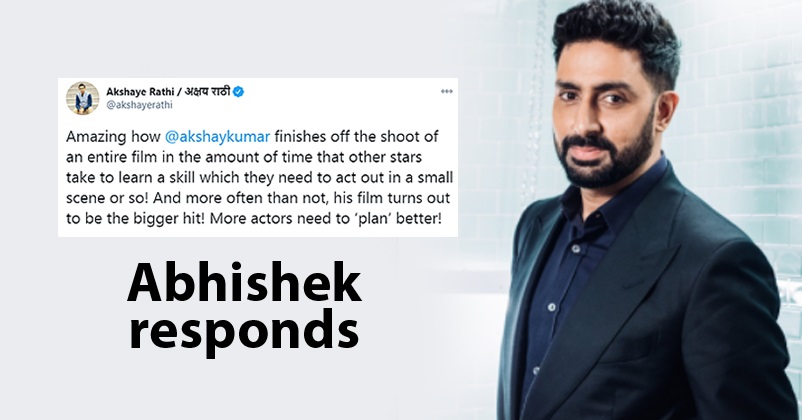 Bollywood actor Abhishek Bachchan may not have been as successful as his father Amitabh Bachchan but he also has a good fan base and many people like him for the fact that he keeps himself cool and calm even when he is trolled on the social media networks. People often take a jibe at him for having no work, enjoying more followers than other celebs and other reasons but the decent manner in which he deals with such trollers has made him earn huge respect among netizens. 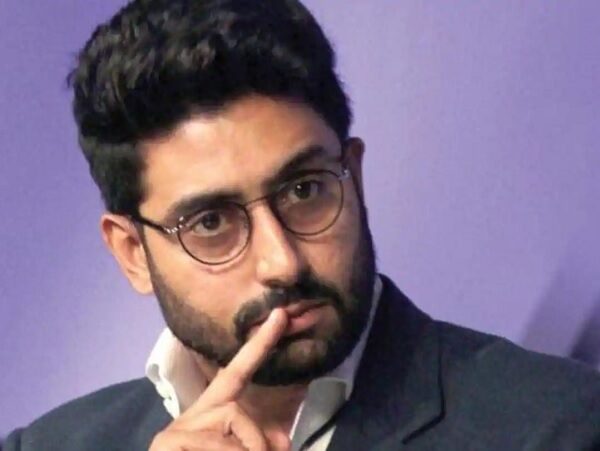 Well, the actor once again involved in a Twitter banter but this time, he was not responding to a troller but was expressing his opinion on an issue raised by the film distributor Akshaye Rathi.

Akshaye Rathi took to Twitter and praised Bollywood actor Akshay Kumar for his fast style of working and completing the shooting of a movie in less time in comparison to others. In fact, he goes on to say that Akshay completes the entire film’s shooting in the amount of time that other actors take just for learning a skill to use in a scene of some film. He further adds that Khiladi Kumar’s movies are usually more successful and other actors should learn to plan better. 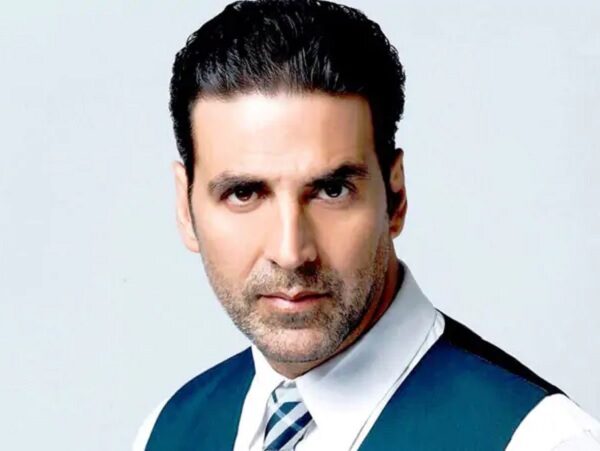 Amazing how @akshaykumar finishes off the shoot of an entire film in the amount of time that other stars take to learn a skill which they need to act out in a small scene or so! And more often than not, his film turns out to be the bigger hit! More actors need to ‘plan’ better!

Not fair! Each to their own. Different people are motivated by different things. And have a different pace at doing things.

Akshaye Rathi responds quickly and tweets that what Abhishek has said is correct in normal circumstances but in critical situations as we are facing now, lot of work needs to be generated in order to give jobs and if not anything, at least hope.

Chief, under normal circumstances…that’s perfectly cool. Right now, the ONLY way to revive the whole ecosystem is by generating a lot of work! And that can only happen if all our top actors / film makers push up the tempo. If nothing else, it will atleast give people hope!

In his response, Abhishek says that only good work generates more work, movies should not be made just for the sake of making because it will do more harm to the industry rather than help.

Good work begets more work! Cannot be making films form just the sake of making films. In the long run you will end up doing more damage to the industry. It’s a bit of a catch 22.

Akshaye Rathi replies that with no content, many cinema halls will get closed permanently and it will take years for reversing the effect.

It is. Likewise, the lack of enough content at this point of time will result in the permanent closure of hundreds of cinemas, which will take years to reverse. Really hope all the stakeholders can work in sync & do whatever it takes to speed up the march towards normalcy.

Abhishek agrees to Rathi’s tweet but at one fell swoop, he also adds that in such times, people are already not going to cinema halls and bad movies will further discourage the few people who are visiting halls so they will also choose to wait and watch them on TV or OTT.

Yes agree, but in unprecedented times like these where people are slowly (and dare I say reluctantly) returning to the cinemas. Bad films could discourage even the few to just wait and see it digitally or on TV.

It was then that a Twitter user joined the banter and praised Akshay Kumar. He tells Abhishek that the actor is feeling bad because he is slow and should learn to work hard and fast.

Bhai..
It's always good to appreciate people who are setting good example for the community.
The one who couldn't they didn't get appreciated..
Simple formula.
I understand you are slow that's why you may be feeling bad.
Work hard and become fast.

Abhishek was ready with a reply for this Twitter user and told him that during the pandemic, he completed a web series, 3 movies and a documentary. He also makes it clear that neither speed nor intent is his problem.

Mr. Prabhakar. During this pandemic, I completed a web series, a documentary and finished 3 films. Released and promoted the web series, 1 movie and the documentary too. I don’t think speed is my problem, neither intent.

While some online users take Abhishek’s tweet otherwise, he makes it clear that he himself lauds the ethic and professionalism of Akshay Kumar.

What is your opinion over this war of words? Do you agree with Abhishek Bachchan or think that Rathi is correct in his viewpoint?

Do You Know Salman Khan Called Off His Marriage In 1999 Even After Wedding Cards Distribution?
Neena Gupta Speaks On Her Dating Mistakes, Recalls A BF Nastily Saying, “You’re Still On Shelf”