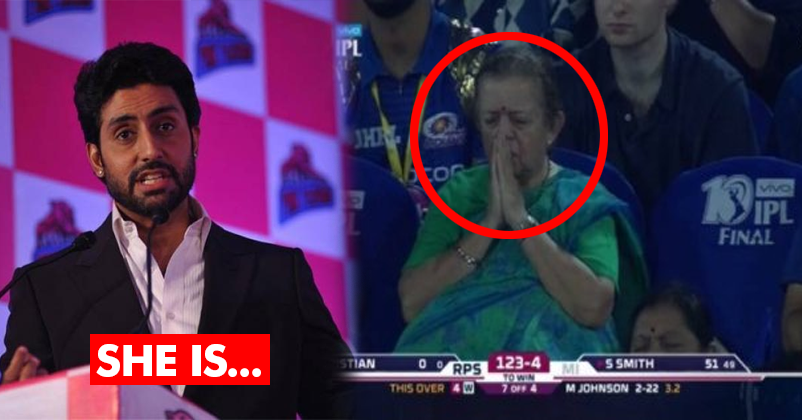 It was a tight clash between Mumbai Indians and Rising Pune Supergiant last night. Fans on both sides were glued to their TV screens and didn’t want to blink their eyes for even a second. The situation was very tensed especially in the last one over when Mumbai Indians managed to defeat Rising Super Giant with a distance of 1 run.

Mumbai Indians were the real heroes of last night, but there was one lady who grabbed a lot of attention on Social Media. When, 7 runs were needed off 4 balls and the situation was just getting intense, the camera focused on this ‘aunty’ who was lost in prayer. Seeing her praying for Mumbai Indians was a sight and the picture went viral instantly. Also, her prayers were accepted soon and Mumbai Indians closed the match with the victory.

From here the lady got popular as “Prayer Aunty” and Twitterati started crediting her for the win. Checkout what happened-

#IPLfinal can anyone know who ws dat aunty praying too hard for #MI.??.#just asking

Aw who is that aunty praying

Aunty ji is so cute lololololol

Praying aunty's prayers answered…MI are the champs of #IPL2017

Later, the suspense was revealed by none other than Bollywood actor Abhishek Bachchan who disclosed the identity of “Prayer Aunty” and said that she is Purnima Dalal, the mother of Nita Ambani.

That is Mrs. Ambani's mother. Popularly referred to as "nani". The lucky charm.

That is Mrs. Ambani’s mother. Popularly referred to as “nani”. The lucky charm.

Now that we know about our lovely “Prayer Aunty”, we hope to see her around in upcoming Champions Trophy. What say?

Dangal Is All Set To Beat Baahubali 2! Worldwide Collections Of Both Movies Are Above 1500 Crores Now!
This Twitter User Made 9 Predictions Of IPL Final Match & All Came True! Is He A Genius?