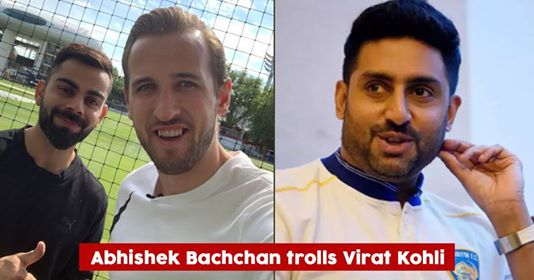 Abhishek Bachchan is a huge Chelsea fan and he often shows his love for the team. India was bought together when these Cricket and football stars posted their picture together on Instagram. Harry Kane posted a photo alongside India skipper Virat Kohli, their interactions were limited to Instagram.

The football star later posted the picture on Twitter saying, “After a few tweets in the last couple of years good to finally meet @imVkohli. A great guy and a brilliant sportsman.”

After a few tweets in the last couple of years good to finally meet @imVkohli. A great guy and a brilliant sportsman. 🏏 pic.twitter.com/vGEOs0gGlT

It was a beautiful moment for both the cricket and football fans all over but Abhishek Bachchan did not seem too happy with it. A die-hard Chelsea fan, Abhishek perhaps did not like his beloved cricket star posing for photos with the team member of Chelsea’s arch-rivals. Abhishek was quick to troll Kohli as earlier he had posted a picture of him, Chelsea jersey.

Rangoli, Kangana’s Sister Is In News Again. Takes A Dig At Karan Johar And Ranbir Kapoor Now
You Will Be Super Impressed With Ronaldo’s Car Collections, Bugatti, Ferraris And What Not