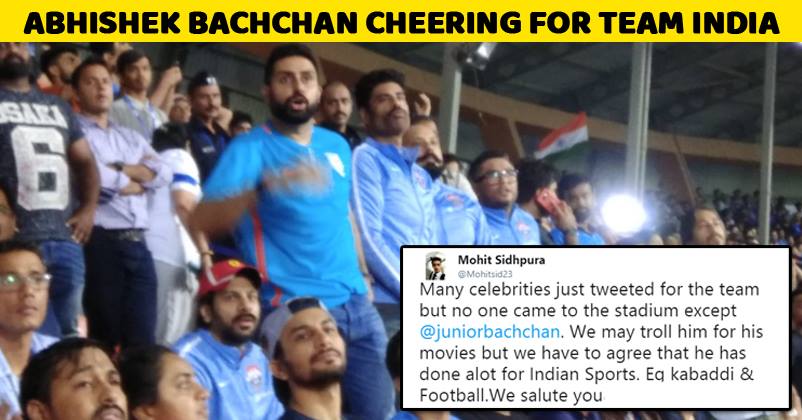 Few days ago, Sunil Chhetri, the captain of Indian football team, shared a heart-warming and emotional video on the micro-blogging site Twitter in which he urged people to watch and support football.

This is nothing but a small plea from me to you. Take out a little time and give me a listen. pic.twitter.com/fcOA3qPH8i

His clip received positive comments from fans as well as celebs and the magic was apparent as a number of people came to the stadium to actually see the match and support the country.

Among all the supporters, there was one familiar face and it was none other than Bollywood actor Abhishek Bachchan who also made it to the stadium to motivate the team and render his support. 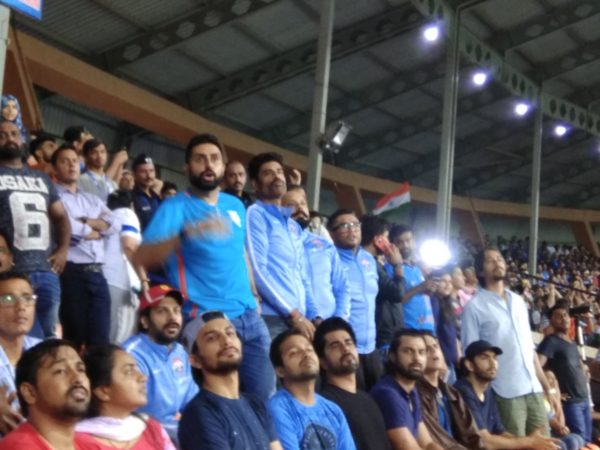 The second Intercontinental Cup match took place in Mumbai on 5th June in which India emerged as the winner over Kenya.

As media got to know about Abhishek’s presence, they started capturing him on camera as he was seen enthusiastically supporting team India and cheering for it.

It was a star-studded gathering and inspired our team to a great extent:

Twitter loved and appreciated how Junior Bachchan actually came to the stadium to show his support instead of giving best wishes on social media from the comfort of his home. Check out some selected tweets:

A big thanks to @juniorbachchan for going and supporting the @IndianFootball team at the stadium in Mumbai today. Also thank u to all those who turned out at the stadium today.Indian football is witnessing a revolution.#INDvKEN @chetrisunil11

This guy is the true football fan unlike others he always comes and cheer for the team .
The passion he displayed in that interview was enough to showcase his love for team indian . Congrats #Abhishek baccha sir . #Chhetri100 #INDvKEN

@juniorbachchan you won our heart by standing there I'm the stands supporting team india.We indian football fans will also stand by your side no matter what anyone say about you. Lota of love #gurubhai pic.twitter.com/rnOopnvDh9

Guys like Abhishek Bachchan and Sikandar Kher are in the stadium to support Indian football team while Biggest of Bollywood stars not only support but make huge loads of money from sham tournament like IPL. #INDvKEN

Good to see @juniorbachchan at #INDvKEN #Football game … leading from the front…his commitment to #IndianFootball is commendable not just #ICL #SunilChhetri #100ForChhetri..#AbhishekBachchan

Wow!! It's a star studded turnout!! Bhaichung Bhutia & IM Vijayan, two of the respected Indian Football players in the stands! Abhishek Bachchan respect for being there & cheering the team. And to the spectators in Mumbai huge love & enjoying & cheering even in rain!

Many celebrities just tweeted for the team but no one came to the stadium except @juniorbachchan. We may troll him for his movies but we have to agree that he has done alot for Indian Sports. Eg kabaddi & Football.We salute you& yay great win for us @chetrisunil11 #100 #IF #blue

Whole India is pumped up. They have the power of Billion Dreams and Prayers #RespectIndianFootballTeam

Presence of @juniorbachchan is really heartening. He must be commended for his active support for sports like Kabaddi and Football. #indvken

@juniorbachchan Sir, It is wonderful on your part that you are promoting sports like Kabaddi and football.

Abhishek Bachchan has won the Internet and our hearts too!

BB Fan Page Said Vikas Didn’t Give Prize Money To Arshi & Jyoti, Got It Back From Vikas
9 Star Families Who Make Most Of Bollywood Industry. The List Is Amazing