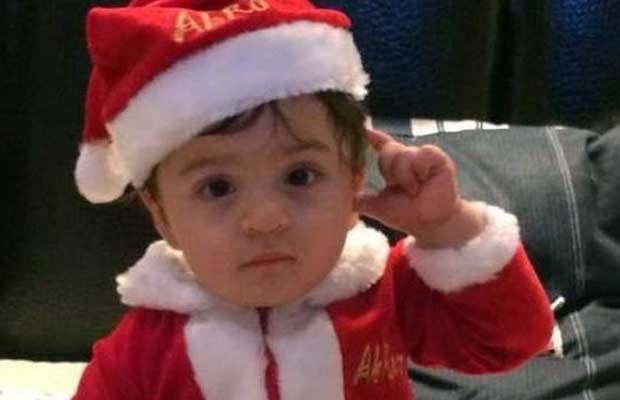 This picture of AbRam Shah Rukh Khan has become viral on many social networking sites. Shah Rukh Khan’s youngest son AbRam is now 1.5years old, who looks so cute when dressed up in a Santa Claus dress.
This lovable baby was clicked with his big bro’s Aryan’s friend. Certainly, he looks damn cute and thus is viral today on the Internet. His thick crop is just like SRK. AbRam is darling of everyone in the house, especially his father Shah Rukh Khan. We have often observed him talking about his little one in many interviews.
We have also seen AbRam’s gorgeous photo taken on Eid with his daddy. This was done in the latest photo shoot and was posted on Twitter. Few months back AbRam made his debut from the Bollywood big screen movie ‘Happy New Year’ that was directed by Farah Khan. Little AbRam was reserved from any shutterbugs for many months.
Also, Shah Rukh Khan’s son Aryan had played a role of younger Shah Rukh Khan in the hit movie released in the year 2001 named “Kabhi Khushi Kabhi Gham”.