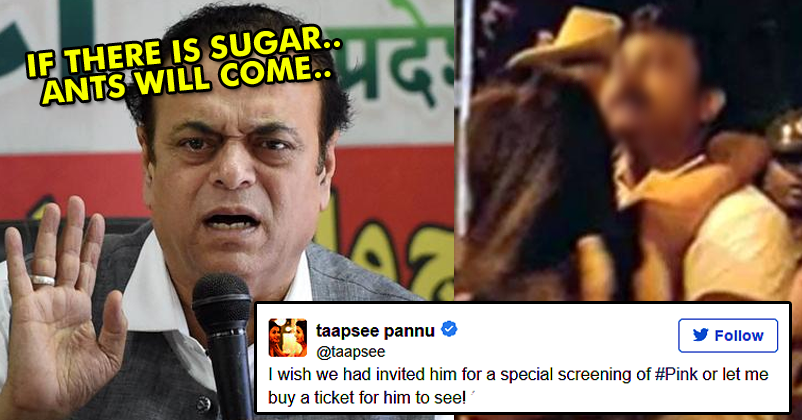 Bengaluru has become the centre of controversies in the start of 2017. A shameful incident happened on New Years Eve, where many girls were molested publicly. Another CCTV footage has came to light where a girl was grabbed, molested and pushed on the ground by two unknown people. Police is not doing anything for the protection of girls, they are not even registering the complaints.

Bengaluru has become a dangerous place for women. On the other hand, political leaders are giving irresponsible statements which is ridiculous.

Now another political leader, Abu Asim Azmi who is a leader from Samajwadi Party has given a ridiculous statement. He compared assaulting of women with SUGAR that attracts ants. His full statement is;

“You have to keep petrol away from fire. And if there is sugar, ants will come automatically to it. In today’s world, the more a woman is nude, the more she is considered modern and educated. Western culture is a black spot on country’s culture and it should be stopped at the earliest.“

He has not made such statement for the first time. He once said “Raped women should be hanged”

He didn’t stop there. He further added

“If my sister is going outside home after sunset with a boy to celebrate New Year, it cannot be expected that people will behave with her in a respectable manner. Many people may get disappointed with my remarks but I don’t care. And this is the fact.”

After his statement Many celebrities slammed him on Twitter. Let’s have a look at some of the tweets..

Argggh how this angers me.Sir punish the criminals not the victims. Women can wear what they want it's their choice. https://t.co/HSpRjlRq8A

None of your business, Vishal

What they were wearing/drinking/whom they were with is no-one's business. Govt/Police shd ensure women's safety, regardless. #BengaluruShame

Blame molesters instead of women, Shekhar.

When will it stop? How long will our society go on blaming women for assaults upon them? #Bengalurushame

Women get molested irrespective of what they wear,where they are. Women in India are not safe,EVEN AT HOME. #Bengalurushame

I wish we had invited him for a special screening of #Pink or let me buy a ticket for him to see! https://t.co/vVQJOgk0YW

Its a shame what the youth have done in Bngluru.Such acts are happning rptdly all ovr.We were also young once bt nvr have such things happnd

I strongly codemn the Banglore Incident.I appeal to the media not to quote me out of context.My opinion is we should follow our culture.

But, will this clarification make everything fine ? Political leaders are showing their mental illness by making such cheap statements against women, There is always a doubt on their thinking.

WTF! She Was Harassed But The Man Was Presumed Innocent Just Coz He Was A Father Of 2!
10 Excuses To Tell Your Boss When You Are Late To Work! You’ll Be Saved!