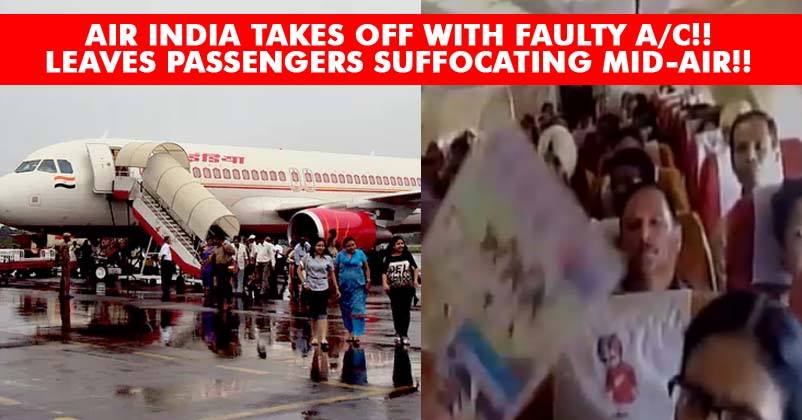 Why do people prefer flights over trains? Obviously for comfort, right? But when all you get is discomfort, in spite of spending so much money on airline tickets, frustration is bound to come.

Air India faced the ire of passengers as the AC in flight AI-880 from Bagdogra-Delhi wasn’t functioning. You can imagine the level of suffocation the passengers must have faced without the AC.
The flight was carrying 168 passengers and non-functioning of the AC was a threat to their lives.

The flight took off from Bagdogra on Sunday at 1.50 pm and the travel time till Delhi was 1 hour 50 minutes (3.40 pm); right from the time customers entered the flight, they were complaining about the faulty air conditioner. However, the crew assured them that the problem would be sorted soon. It was so hot that passengers had to fan themselves in order to get some relief. One of the passengers shot a video of this incident and in no time, it went viral over the internet.

Here’s one more video in this connection;

Passengers started feeling very uneasy; one of them tried to use the oxygen mask since she was feeling breathless, but sadly, even that didn’t work.

She took to Twitter and said that she lodged a complaint against Air India; here’s her tweet…

@airindiain AI 880 the AC & oxygen mask (only one)was not working from IXB though the captain did nothing.Lodged a complain at DEL .

As of now, Air India hasn’t issued any formal apology; the airlines just said that there was a major technical issue and the matter is being probed. The cabin crew is very irresponsible; lives of 168 passengers were endangered due to this hot atmosphere.

Let us see what the investigation says.

Big News For CBSE Students: From Now On 10th & 12th Exams To Be Held In This Month & Not March!
You’ll Have To Pay Double GST On Credit Card Payments! Here’s The Truth Behind This Viral News