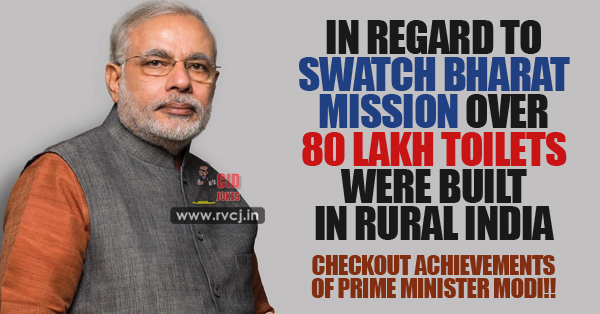 Narendra Damodardas Modi, the leader of the Bharatiya Janata Party (BJP) was sworn in as the Prime Minister of India on May 26, 2014. The ceremony was attended by the heads of all SAARC nations. The Modi government had outlined its agenda for five years which includes various measures to increase growth and create job opportunities. The government also promised to encourage investment opportunities and create a certain, transparent and just environment. At the first joint sitting of Parliament after the 2014 General Elections, President Pranab Mukherjee said that the new government will begin a series of social, health and infrastructural programmes. Here we bring to you the achievements of the government after being in power for about a year and a half.

1. Mr. Modi confidently declared ‘achhe din’, or good days, were on the horizon New Delhi’s revised estimate of India’s GDP growth of 7.5%, a figure surpassing China’s, is the result of changes made to the rate calculation methodology, and is therefore likely inflated. Operation Rahaat for Indians at the war torn Yemen saw a new phase of governance when Minister of State for External Affairs Gen. (Retd.) V.K. Singh himself was present in Yemen and coordinating with the military forces. It brought India in the world’s eye as a leader when nations like America asked the help of Indian authorities for evacuating their citizens. It is also said that when gangster Chotta Rajan was arrested Gen. (Retd.) V.K. Singh was present in Indonesia and played an important role in his arrest.

3. A slow but steady development The PM’s statistics on electricity generation show that his administration has achieved 8.4% growth in electricity generation compared to 6% growth in the UPA regime. In terms of new roads, the Modi government claims to have built 7,980 kilometres of roads and highways in the last one year compared to 3,621 kilometres during 2013-14. On the cleanliness front, the Modi government says it has built more than 58 lakh toilets in 2014-15 compared to 49 lakh toilets. This New Year PM Modi said that the ‘world is optimistic about India.’ He also wrote that those who share their thoughts using the hashtag #SaalEkShuruaatAnek (the official hashtag that the government is using on the occasion) will get personalized messages from the Prime Minister himself. Prime Minister Narendra Modi laid the foundation stone of the 600MW Kholongchu Hydro- electric project, a joint venture between India and Bhutan from which India will get a lion’s share. Notably absent from the Modi government’s one year and a half in office has been the kind of multi-billion dollar corruption scandal responsible for bringing down the previous government. The government has also deregulated prices for diesel fuel, auctioned off coal and telecommunications licenses in an open and transparent way.

8. Wheels are rolling for the Lion of Make in India The government has made much progress in the past 12 months, implementing measures to encourage foreign direct investment (FDI) and a more friendly business environment for foreign companies and promoting energy, coal and mining reforms, as well as implementing enhanced social welfare programmes. Also, India has packaged and dispatched the first order of Australian metro under the ‘Make in India’ scheme on January 31, 2016.

9. India is being acknowledged in the world British Prime Minister David Cameroon stated that he could see ‘achche din’ arriving in India and today India is being welcomed on a global level by every developed nation that one can count off. This is a good step. Donald Trump who has been quite popular in America and unpopular in the rest of the world for his remarks on refugees also has good words for the Modi government and India. India had got a better stand at the World Trade Organisation (WTO). From German Chancellor to the American President and also powerful people like Valdmir Putin have welcomed India. Japan has come forward and has put investments in the projects of Make in India. Last government had almost forgotten the defence sector but after the new government was sworn in India saw many war ships (INS Vikramaditya, INS Vishakhapatnam, etc) being commissioned with immediate effect. Efforts to fill the arsenal with ammunition were made. Defence deals like the Rafale deal saw something new where no requirement of middleman or problem of accountability is there as the PM himself went on to do the deal.

11. Some strong bills and necessary changes

12. Many schemes for a better India The Swach Bharat Abhiyan, Pradhan Mantri Kaushal Vikas Yojna, Make in India, Digital India, etc are the ambitious projects which are a new light for the Indian youth as these will create employment. The true power of internet is shown to people by this government. Ministries were digitalised and accounts on Twitter and Facebook made. Within minutes you will be contacted by authorities. Recently it was seen the Railway Minister reached out to help many people through tweets on Twitter. Minister for External Affairs, Sushma Swaraj and Minister of State for External Affairs Gen. (Retd.) V.K. Singh also helped people who lost their passports or were in trouble in foreign nations using the social media. Relief Operations of Yemen and Nepal also saw such incidents where people got help by just their posts on the social media. Railways were becoming a nightmare for women especially when travelling alone due to stalkers and molesters. Now a helpline number ‘182’ has been released by which you can get in touch with the Railway Protection Force (RPF) and feel safer. Also the Beti Bachaao Beti Padhao Scheme has been launched as UNICEF released a report stating sex ratio ranking of India dropped down by 43 positions.

Due to paucity of space we may have missed few achievements. Do not forget to share them in comments below.

10 Extremely Disturbing Facts You Wish You Didn’t Know
Twist Pe Twist! No One Thought This South-Indian Wedding Would End Up This Way!