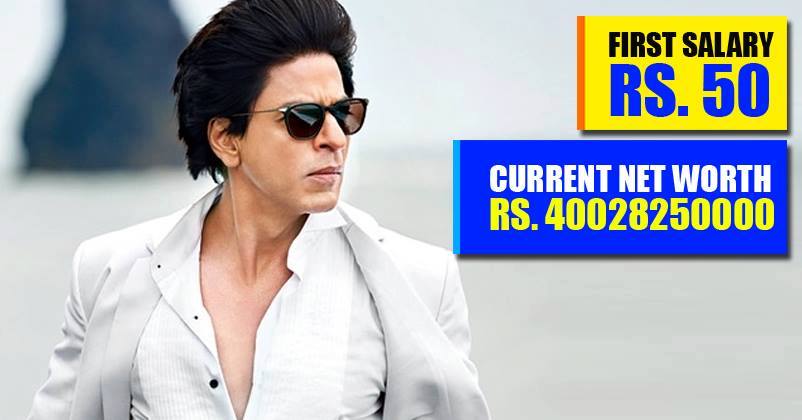 Our world is indeed a materialistic world where the magnitude of a person’s success is measured by the amount of money present in his or her bank account. As an audience it takes us a great effort to appreciate a person’s talent and skills which is usually ignored in our final judgement for the movie. It is said that when your talent gives up to work hard, it is upto you to work hard and achieve your goal. Dedication and passion towards your goal is something that keeps you going and help you achieve your dream.

No matter what are the circumstances, all you need is to trust in your instincts, your GOD and in yourself. Today, I will come up with top 10 rich bollywood celebrities who were once poor or financially weak but didn’t give up hope and made it big ! ! Shahrukh Khan is a living example of how hard work and dedication can help you achieve your dreams. His first salary was Rs 50 which he earned by working as an usher at Pankaj udhas’s concert in Delhi. He has even sold the tickets of his own film ‘Kabhi Haan Kabhi Naa’ at the booking window of Mumbai Cinema. Today his net worth is $600 Million i.e. 3752 crores. This ‘Bindaaaas Bidoo’ of Bollywood had his rough days back when he was just 14. He used to odd jobs like sticking posters on the walls and selling peanuts which hardly earned him Rs 60 a day. He has a net worth of more than 175 crores. This rough Jatt actor went through quite a lot of tough times back in his days when he used to work as a waiter in a Chinese restaurant in Australia. He earned 8 $ for an hour and 1.3 $ for every delivery he made. Today, his net worth is $10 Million i.e. around 60 crores. He roughly charges around 5-6 Crores for every Hindi Movie. This versatile actor is a gem for our Bollywood Industry who was once paid Rs 25 for every student that he used to teach in his home town, Jaipur. Today his net worth is almost 300 crores. She is a pool of talent. He has made her name into Bollywood by her hard work and passion. She was a student in University of London. Her grandparents paid for her tutions but she used to work in an Italian Cafe to earn extra income. She worked there for 4 weeks and was paid 40 Pounds. Today her net worth is more than 120 crores. This khiladi of our Bollywood once worked as a waiter and Chef in Bangkok. His first salary was around Rs 1500. Later on he came back to India and with his hard work and dedication broke into Bollywood. He is one of the highest tax paying celebrities and has a net worth of $150 Million i.e around 900 crores! Before becoming a bus conductor, he took up odd jobs like carpenter and coolie which hardly paid him Rs 10 for a day. He is now a recipient of the Padma Bhushan. His net worth is estimated to be around 300 crores. In his recent movie ‘KABALI’, he charged almost Rs 35 Crores. This crisp and down to earth actor once earned his bread by working as a watchman. His first salary was Rs 300 for a month. Today he has a net worth of more than Rs 120 Crores. In a recent interview with Rajiv Masand, he was quite diplomatic when it came down to reveal his pay scale. However, he did reveal that he once charged more than Rs 1 Crore for a film along with an another film for just mere Rs 1 Lakh. No matter how much you troll her for her ridiculous comments, she had once served food at hotels, weddings and other place in order to earn some money for her survival. Many people also speculate that she worked as a bar dancer before making her way into B-Town. Her first salary was mere Rs 30 way back when she was 11 years old for serving food in a hotel. However, she has now a net worth of Rs 15 Crores which she declared while contesting in LOK SABHA 2014. When he small, he used to help his mother in running their ancestral bakery shop so as to help her earn the bread for their survival. As he grew up, he started working as a waiter and a room service attendant in Mumbai’s Taj Mahal Palace Hotel. His first salary or more precisely TIP was a 5 rupee coin. He had taken the No. 1 spot on People With Money’s top 10 highest-paid actors in Bollywood for 2014 with an estimated 450 crores in combined earnings.

Amitabh’s Face Mask In The Movie Pink Is Not An Ordinary One, Here’s What It Does!
Here’s The Reason Why Diljit Dosanjh Refused To Star In Ajay Devgn Starrer ‘Baadshaho’