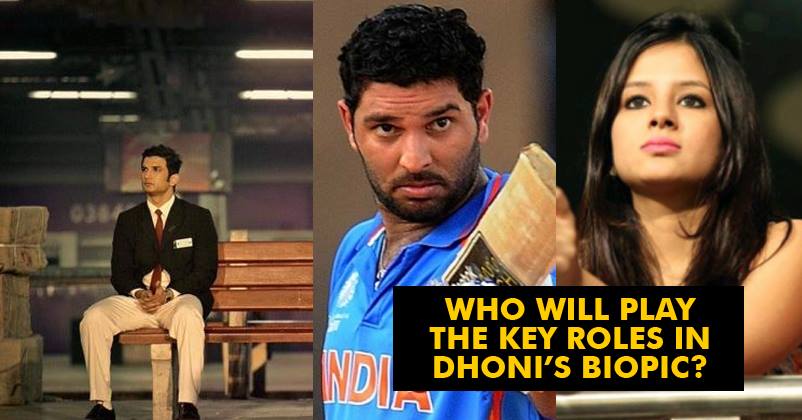 Ever since the trailer of Dhoni’s biopic, ‘MS Dhoni: The Untold Story’ is released, people have gone crazy! Yes, the trailer is very exciting and everyone is eagerly waiting for the biopic’s release now.

Scheduled for the 30th September release, the movie revolves around Dhoni’s success in the world of cricket. Moreover, it also sheds light on his journey from a Ticket Collector to a Captain. Looking at the trailer we can say that Sushant Singh Rajput is just perfect for the lead role. In fact, he has imbibed the expressions and mannerisms of Dhoni so well that he is surely going to receive a lot of appreciation from the audience and critics both.

However, there are some other characters too who hold a lot of importance in Dhoni’s life and the flick portrays them too. These people include Yuvraj Singh, Suresh Raina, his wife Sakshi Dhoni, Zaheer Khan, his father Pan Singh, his ex Priyanka Jha, and his sister Jayanti Gupta. Want to know which actors are going to play their roles? Have a look…

M.S Dhoni to be played by Sushant Singh Rajput! Sushant Singh Rajput would be essaying the role of the Captain in the movie. Hope he does justice to the role.

Yuvraj Singh to be played by Herry Tangri! Herri Tangri is going to essay the character of Yuvraj Singh. Basically, he is a right-handed batsman and usually plays at District level. To match up to the left-hander, he had to undergo 1 month of training.

Suresh Raina to be played by Ram Charan! Ram Charan is very famous in Tollywood. He will be essaying the role of Suresh Raina, who is very close to the Captain.

Zaheer Khan to be played by Gautam Gulati! Gautam Gulati had basically given auditions for the lead role, but finally he ended up playing Zaheer Khan’s role.

Sakshi Dhoni to be played by Kiara Advani! Kiara Advani would be essaying the role of Sakshi Dhoni in the movie. Hope she matches Dhoni’s wifey perfectly..

Pan Singh (Dhoni’s father) to be played by Anupam Kher Makers have perfectly chosen Anupam Kher to essay the role of Dhoni’s father, Pan Singh in the movie.

Priyanka Jha (Dhoni’s Ex-GF) to be played by Disha Patani! Disha Patani is hot and sizzling! Yes, she will be making her Bollywood debut with this biopic. Let us see how she performs. Disha is roped in for the character of Priyanka Jha (Dhoni’s Ex-GF)

Jayanti Gupta (Dhoni’s sister) to be played by Bhumika Chawla Bhumika Chawla, the ‘Tere Naam’ actress would be essaying the role of Dhoni’s sister Jayanti in the biopic.

So aren’t you looking forward to the movie after learning more about the characters? Do let us know your comments in our comments section below.

You’ll Go ROFL Seeing How ‘Trust Me Darling You Cannot’ Is Apt For These Situations
4th Day Collections Out ! Akshay Kumar Is Still Dominating Hrithik Roshan!