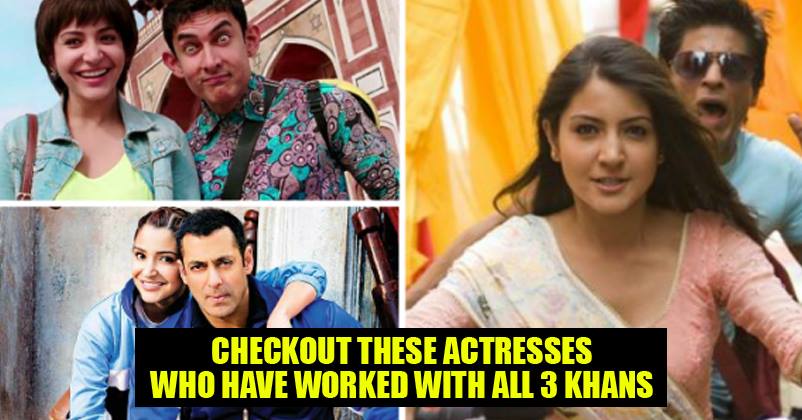 Aamir Khan, Salman Khan and Shah Rukh Khan are ruling the Bollywood industry, isn’t it? These 3 Khans are known for their enormous fan following, performance and talent. Working with them is surely a pleasure for all celebrities. However, these 4 actresses have been lucky enough to get a chance of working with all the 3 Khans. Let us have a look at them! SRK and Kajol’s pair has been awesome. They have given very good hits till date. SRK-Kajol’s ‘Baazigar’, ‘Karan Arjun’, ‘Kuch Kuch Hota Hai’, ‘Dilwale Dulhaniya Le Jayenge’, ‘Dilwale’, ‘My Name is Khan’ and ‘Kabhi Khushi Kabhi Gham’ can never be forgotten. Talking about her chemistry with ‘Salman Khan’ it was just too good in ‘Pyaar Kia Toh Darna Kya’. Moreover, she starred opposite Aamir Khan in ‘Fanaa’ and it was definitely a treat for viewers! Anushka Sharma made her debut opposite SRK in ‘Rab Ne Bana Di Jodi’. Then they were again seen in ‘Jab Tak Hai Jaan’. She shared an amazing chemistry with Aamir Khan in ‘PK’ and then with Salman Khan in the latest ‘Sultan’. Madhuri Dixit has shared space with Salman and SRK in the same movie i.e. ‘Hum Tumhare Hain Sanam’. She has also given other hits with SRK like ‘Devdas’, ‘Koyla’, ‘Dil Toh Pagal Hai’ and ‘Anjaam’. She shared a sizzling chemistry with Salman Khan in ‘Dil Tera Aashiq’, ‘Saajan’ and ‘Hum Aapke Hain Koun’. Talking about her chemistry with Aamir Khan, it was just amazing in ‘Deewana Mujh Sa Nahin’ and ‘Dil’. Rani Mukherjee too worked with all 3 Khans! Her chemistry with SRK in ‘Kabhi Alvida Na Kehna’, ‘Paheli’, ‘Chalte Chalte’ and ‘Kuch Kuch Hota Hai’ was just fantabulous. Then, she even played the love interest of Salman in movies like ‘Chori Chori Chupke Chupke’, ‘Kahin Pyaar Na Ho Jaaye’ and ‘Baabul’. She was also seen with Aamir Khan in the movie ‘Ghulam’ and ‘Talaash: The Answer Lies Within’. Even Kareena Kapoor was lucky enough for working with all 3 Khans. Her on-screen chemistry was amazing with SRK in ‘Don’, ‘RaOne’ and ‘Asoka’. She was starred opposite Salman Khan in ‘Bodyguard’, ‘Dabangg’, ‘Kyon Ki’, ‘Main aur Mrs. Khanna’ and ‘Bajrangi Bhaijaan’. She also gave some hits along with Aamir Khan like ‘Talash’ and ‘3 Idiots’. Katrina was superb with SRK in ‘Jab Tak Hai Jaan’. She also got a chance of romancing Aamir Khan in the movie ‘Dhoom 3’. Moreover, her chemistry with Sallu was awesome in ‘Yuvvraaj, ‘Partner’, ‘Maine Pyaar Kyun Kiya’ and ‘Ek Tha Tiger. Karisma too is lucky enough. She was seen with SRK in ‘Dil Toh Pagal Hai’. Then, she romanced Aamir Khan in the movie ‘Raja Hindustani’. Moreover, she was seen alongside Salman in the movies like ‘Judwaa’, ‘Biwi No.1’, ‘Andaz Apna Apna’ and ‘Dulhan Hum Le Jayenge’. Remember Priyanka’s Lookalike Which Made Everyone Crazy? Now, Here’s How Priyanka Has Reacted To This!
OMG ! ! Someone Cheated M.S Dhoni And He Is In No Mood To Forgive ! !