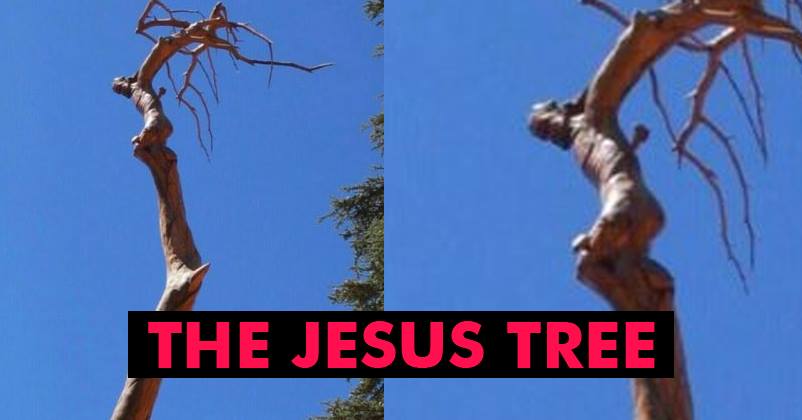 ‘Belief’ is something that doesn’t need to prove its existence among the countless minds and souls of people. Its roots are held deep in the faith of people. It doesn’t really matter what religion a person belongs to, he will always hold high values and respect for the faith in which he believes in.

Today, in this article we will be discussing about a tree which is not an ordinary one but rather a more spiritual and a sacred one for Christians or more precisely anyone who believes in GOD. This tree is called ‘THE JESUS TREE’. And as the name suggests, a sculpture of Lord Jesus has been portrayed on its trunk. Have a look at it (zoom in). The position at which Lord Jesus has been portrayed, it seems like he has been crucified on a cross, doesn’t it ? However, it would be quite a miracle if a tree actually transformed itself to look like this. Or is it just a pareidolia ( the habit of perceiving certain patterns or objects as something which doesn’t really exist).

However, I would like to request all the atheists and believers to calm themselves down and take a breath to accept the reality. This tree does exist, and the sculpture of Lord Jesus is not a result of photoshop editing skills. IT IS REAL.

But what is more interesting is that fact that this JESUS TREE has been literally made by a man. The name of this man is Rudy Rahme. He is a Lebanese poet, painter, and sculptor. This very particular tree was a dead cedar tree in the forest of CEDAR OF GOD (Al Arz el Rab) in Northern Lebanon. Rudy Rahme literally carved out the sculpture of Lord Jesus out of the trunk which is one of the finest display of art and patience. And carving out such a masterpiece was not a day’s or a week’s work for him but it took almost 5-6 years to bring the best out of the dead cedar tree. This picture was originally taken by Louppe1 in June 2007, however, it was the year 2015 when his picture got viral on Facebook by calling it evidence of ‘THE POWER OF GOD’S GOODNESS’. Have a look at that viral post. English Translation -Praise Jesus our God… See how this tree looks like Jesus crucified on a cross… Amen… May our lives be blessed every second in his memory…
It is important for people to understand that the artist of this masterpiece needs to be respected and given the credits that he deserves. Misleading people in the name of God is not a wise thing for your own gains.

Have a closer look at the sculpture. And this is not the only masterpiece made by him, he has a pool of such amazing artwork. Have a look at them. What do you think about his talent? Share your opinions and views in the comment section below.

Continue Reading
You may also like...
Related Topics:jesus tree, lebanon

Don’t Plan A Honeymoon To These 10 Places! The Sun Never Sets Here!
Nigeria Is The 3rd Poorest Country In The World! You’ll Be Surprised To See The Wealth Of Kids!