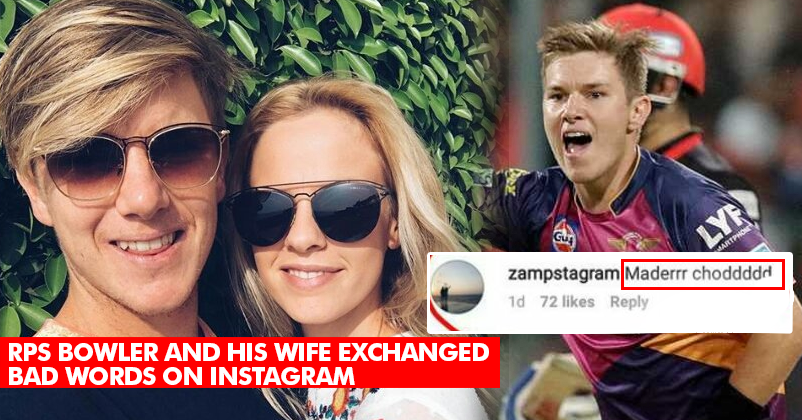 The ace leg spinner is however not having his rocking time with the franchise this season as he just got to play only 2 matches under the Australian cricketer and captain of the team Steve Smith.

This time he is not in the news for his on-field performance but his social media presence and his conversation with his wife which is hilarious.

Well, there is a desi twist in this lovely tale and you guys would exactly know why it is funny. His interaction with his wife Hattie Leigh Palmer garnered a lot of attention.

Hattie Leigh Palmer shared an adorable photo on Instagram with her partner Adam Zampa and she captioned it as “Thanks for the memories, India. Mera m**e le, Adam.”

Well, if that was a shot, wait for what Zampa replied in the comments section. He wrote “Ma***rr ch*****d.”

You all can pretty well know the meaning of asterisk there, we don’t have to define it to any Indians here.

Looks like someone have definitely played a badass prank on the two. It is very difficult to gauge who taught them these words but whoever did is one naughty mind.

It came across as if these two learned these words in Hindi and they really wanted to show off but the end result we all know is a joke because the meaning of the words and their comments on the photo is totally hilarious.

Whoever tried playing a prank has nailed it, what do you guys feel about this? Let us know in the comments section.