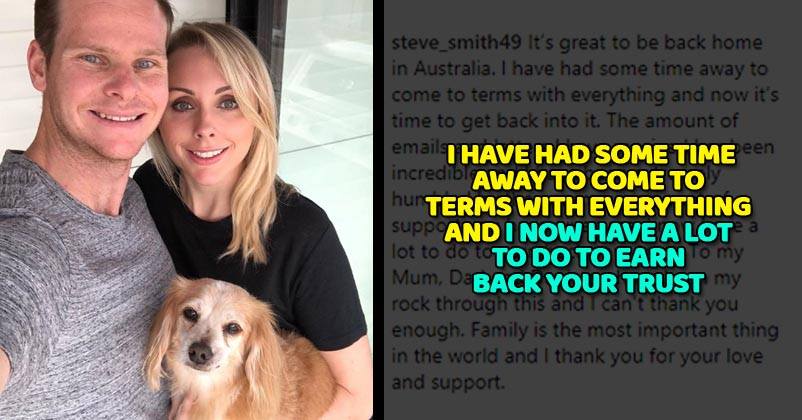 Steve Smith got the shock of his life due to ball-tampering scandal in the month of March. He and David Warner were banned from the games as they were found guilty.

Smith was slapped a 1 year ban from cricket. Even when he was banned, he couldn’t control his tears at the press conference. After that, he was not to be seen on social media as well.

Finally, the 28 year old batsman is back on Instagram and has dropped a emotional message about “Lost Respect”. Yes, he has promised his fans that he will back soon and this time, even stronger.

He posted a photo of his girlfriend and his dog and wrote a heart-touching message. Here’s the post;

“It’s great to be back home in Australia. I have had some time away to come to terms with everything and now it’s time to get back into it. The amount of emails and letters I have received has been incredible and I have been extremely humbled by the enormous amount of support you have given me. I now have a lot to do to earn back your trust. To my Mum, Dad and Dani you have been my rock through this and I can’t thank you enough. Family is the most important thing in the world and I thank you for your love and support.”

We hope Steve Smith comes back like before and wins hearts of fans once again.

Which Team Of IPL 2018 Is Most Popular On Social Media? Check Ranks
Jadeja Took Kohli’s Wicket & Was About To Celebrate But Didn’t. Twitter is Trolling Him