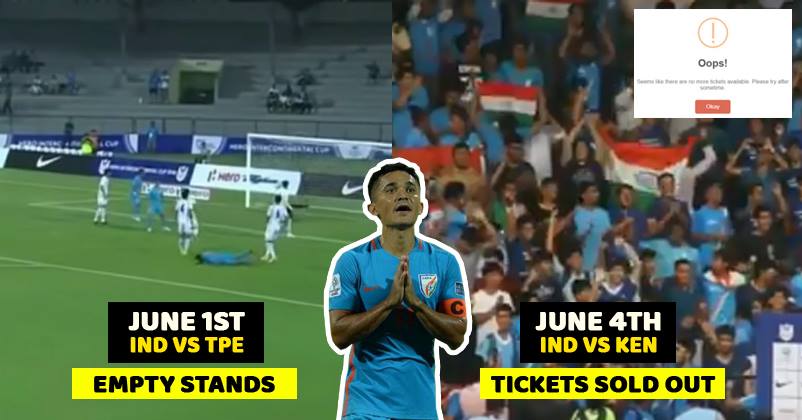 Sunil Chhetri’s appeal has worked wonders. Couple of days back, he took to Twitter and appealed to masses to support football too since the team is playing only to make India proud.

Football matches in India don’t even get half the response that Cricket gets. The Hero intercontinental cup is going on, but fans seem to be disinterested in the same.
On the 1st of June, the match was played between India and Chinese Taipe. However, the stadiums were dull as there was hardly anyone. In fact, Sunil Chhetri scored his 3rd International hat-trick, but sadly, there was no one to cheer for him.

After seeing this, he appealed to masses to come to the stadium and watch their matches. After his appeal, people have gone crazy. All the tickets have been purchased and stands are full.

Today’s match is between India and Kenya and when you try buying tickets, it will show you “HOUSE FULL”

Warming up for the game!

We are sure Chhetri would be overjoyed to see such overflowing stands. Isn’t it a great feeling?

Waqar Younis Posted A Pic On Twitter. Indians & Pakistanis Are Proud Of Him
BCCI Raised Salary Of Indian Umpires. It’s Much More Than Pakistani Umpires