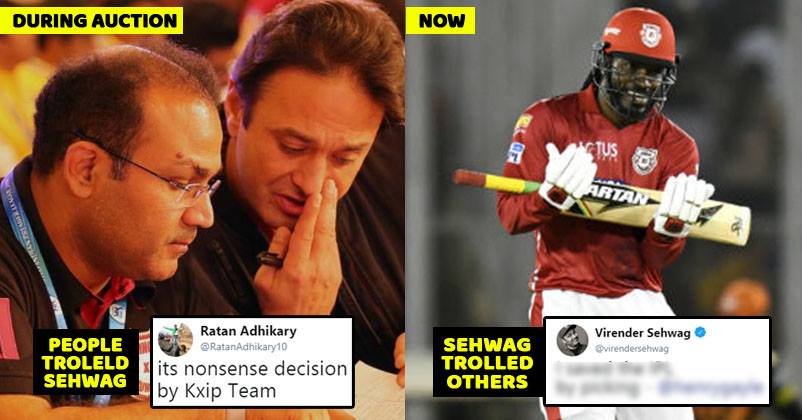 The West Indies cricketer Chris Gayle proved his worth in IPL 2018 when he had a blistering knock of 104 runs off 63 deliveries, ensuring the third victory of Kings XI Punjab (KXIP) in the tournament.

When he received the Man of the Match award, he expressed gratitude towards Virender Sehwag and credited him for “saving the IPL”. He hit the first century of IPL 2018 at PCA Stadium, Mohali, and showed his haters that even at the age of 38, he’s better than many young players. 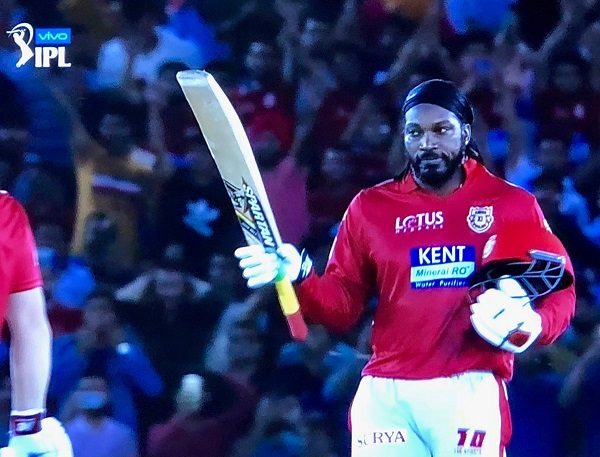 Just to inform, Gayle was a part of Royal Challengers Bangalore (RCB) from 2011 to 2017; however, the team released him this year and he remained unsold on the first day of the auction. It was on the second day that KXIP purchased the played for Rs. 2 Crore, his base price. Even though Gayle didn’t get a chance in the first two matches for the team, he just nailed it with 63 runs off 33 deliveries in the third match.

When Preity and Sehwag took the decision of keeping Chris Gayle in KXIP, others trolled them for picking an aged player over young ones. Check out some tweets:

very bad decision..our old players amla and gupthil is still waited to have a team..!! 😢😢
amla is a very solid player …and he proves that…and also gupthil Very dangerous in indian conditions..last season he gave some wonderfull opening with manan and Maxi…!!

its nonsense decision by Kxip Team

Guptill/Hales would have been better options. Gayle has had his day

However, after Chris Gayle’s stunning performance, it was time for Sehwag to give it back to trollers and he did it in the most epic way.

Sehwag took to the micro-blogging site Twitter and wrote, “I saved the IPL by picking – @henrygayle 🤣🤣.”

Even Chris Gayle stated this,

“I think Virender Sehwag saved the IPL by picking me (in the January auctions).”

I saved the IPL by picking – @henrygayle 🤣🤣.

To this, Chris Gayle replied, “Yes!”

If you don’t Then you don’t
Love me at Deserve me at
my my pic.twitter.com/lGQFHyimR0

Viru made one more tweet to praise Chris Gayle and it read,

After his 21st century in the T20 cricket on Thursday, Chris Gayle has made it clear to his critics that there is still a lot of cricket remaining in him. However, he needs to work on his fitness if he wants to play all the remaining matches for KXIP, considering the fact that it is pretty hot in Punjab in this time of the year.