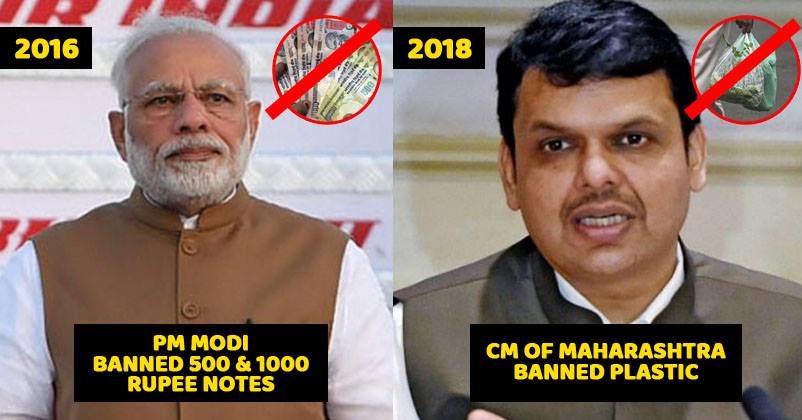 In November 2016, we all were shocked over demonetization decision. It was sudden and unorganized. There were big queues outside banks and ATMs because withdrawal limits were applicable.

That move of Modi government received immense criticism from the public. After that unplanned move, one more big decision is making people angry. Yes, we are talking about total plastic ban which became effective in Maharashtra, especially Mumbai.

There’s total ban on all plastic items & it is making things messy mainly in the food sector. Use of plastic in restaurants and home delivery companies just can’t be avoided. But now that the ban is on, they will have to think of some alternative.

This plastic ban alone is going to cause loss of 3 lakh jobs in plastic manufacturing industry and Rs 15,000 crores.

Since yesterday, many people have been fined. It is said that the government has collected approximately Rs 3 lakhs in fine till now.

People are frustrated over this complete ban. Here are some selected tweets;

Total plastic ban in Maharashtra to come into force from tomorrow.Its completely unplanned.Govt is not ready with any alternative plan to replace it.The penalty regime against the users & manufacturers will creat havoc and encourage bribery on a large scale#BeatPlasticPollution

: So much hype on #PlasticBan Rather the government should move forward with Cigarettes & Alcohol bans? Human life seems to be least focused it seems 🙄

When ever rains exposed BMC and government, they diverted the attention of people with some 11th hour gimmick. Past ten years #PlasticBan could not be successful, @Dev_Fadnavis promised floods free Mumbai during election campaign, but failed on all fronts.

Only middle class is affected!

This Government certainly does not believe in looking before the leap.
Unplanned leap has effected only the middle class. Demonetisation did it even dent the rich pockets? GST extra labour for the already labourous life. Now this #PlasticBan, no alternatives.
Who are you saving?

This plastic ban and the way it is being implemented. Ugly. One more way of terrorising citizens by the Govt. A measure that has benefits but now a way to extort money, increase corruption, harass citizens and businesses. A mini demonetization in process.

Plastic ban is like demonetization. That time no currency to exchange now no substitute of plastic available. Hats off to @Dev_Fadnavis for harassing public.

First demonetization, then GST and now plastic ban. Seems like enough challenges for a small business owner to keep thinking on the feet and keep evolving.

What do you have to say of this? Is plastic ban a good move?

These Politicians Don’t Have Registration Number Plates On Their Cars. This Is The Reason
BJP Minister Got 2 Frogs Married For Rain. Twitter Made Fun & Trolled BJP Hilariously