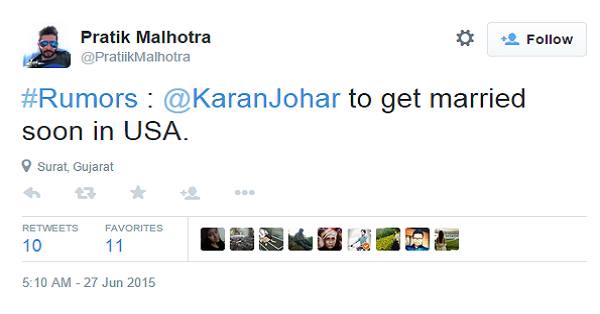 Here is yet again sensational news from the Bollywood industry where the famous director and producer Karan Johar loses his calm when he saw something on Twitter.

Now-a-days, the web world is celebrating the latest decision taken by America, which is for legalizing gay marriages in all of the 50 states. Ever since, social media has become a vital platform for trolling and targeting some folks. In this connection, a twitter user tried to troll Karan Johar with the following tweet: Quite naturally, it was not at all acceptable on the part of Karan who gave it back to @PratiikMalhotra in such a way:

https://t.co/5We8Ko4Sbg it's so sad and disgusting when a major breakthrough movement is made into a mockery by some on Twitter!! Shame!!!

Is making fun of someone in the wake of a celebrated and respected decision correct or justified in any way? Isn’t this tweet disgraceful and offending? Share your views in the comments section below!

Snapdeal Does It Again, Sends Stone Instead Of Samsung Galaxy S3 Neo
If Politicians & Bollywood Stars Had Pets Then What It Would Be Like