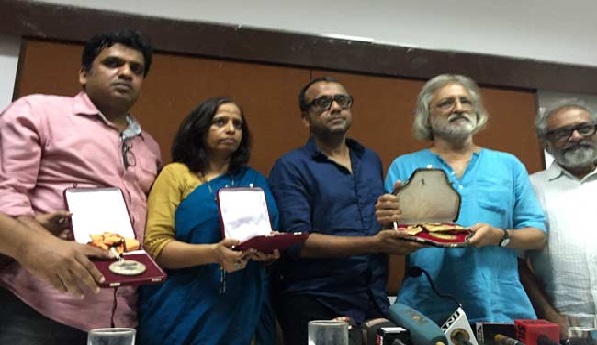 In solidarity and against the rising intolerance in the so-called democratic nation, after writers, scientists and artists to return their awards and accolades, National Award winning filmmakers are the latest to join the bandwagon. In solidarity with FTII students’ protest against appointment of actor Gajendra Chauhan as its chairman and four others, 10 people of the film fraternity including FTII alumni have decided to return their National award.

The list includes some of the most eminent filmmakers from the fraternity. A group of 10 filmmakers including Dibakar Banerjee and Anant Patwardhan returned their National Awards citing “I am more afraid today than I was during the emergency because now there are roving gangs looking to do violence against anyone who speaks out. If you don’t believe in armed struggle, then what do you do? This is what we have. We want to be a part of the awakening that is happening around the country, like the scientists and artists and writers returning their awards,”.

The eminent creatives brains of the country be it artists, filmmakers, writers, everybody are utterly disgusted with what’s happening in the nation. The appointment of ‘people with narrow visions’ in institutions like Children’s Film Society and Central Board of Film certification shows acts as a threat to the culture and democracy of India. The lynching of Mohammad Akhlaq and the murders of rationalists like Narendra Dabholkar, Govind Pansare and M M Kaburgi, also recent killings over beef and cow slaughter rumours is seen as a “threat to diversity and freedom of speech.”

Ain’t the situation getting worse day by day? And, above all the government seems to be reluctant and change its attitude towards the scenario. What is your take on the issue? Share your views, suggestion, opinions in the comment box below.

After Capturing Online Market, Flipkart Enters Into Offline Market To Sell Its Products
Woman Stopped To Board Flight In Short Dress Coz IndiGo Staff Finds It INAPPROPRIATE